Household credit had reached a record high of 1,726.1 trillion won (US$1.55 trillion) as of December last year, up 44.2 trillion won from three months earlier.

The debt service ratio (DSR), a barometer of risky household loans, measures how much a borrower has to pay in principal and interest payments in proportion to his or her yearly income.

The planned tougher restriction will require 40 percent of the DSR to all borrowers, according to the official at the Financial Services Commission.

Earlier this month, the government said it will ease construction regulations and support redevelopment projects in urban areas to increase the number of new homes by up to 836,000 nationwide in the next four years.

The latest housing policy centers on expanding the home supply in the greater Seoul area and other major cities in what could be a shift from its focus on imposing tougher regulations, including lending curbs.

Soaring housing prices have shown no signs of a letup despite the government's efforts to cool down the heated market. Prices for home rentals have also shot up in recent months due largely to a supply shortage. 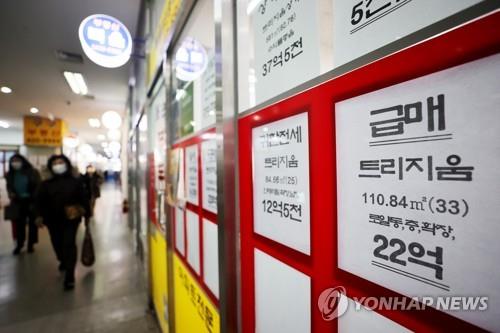