SEOUL, March 3 (Yonhap) -- Prime Minister Chung Sye-kyun on Wednesday instructed officials to review the authorization of the AstraZeneca vaccine for people aged 65 and over.

"New research results have been disclosed, indicating the AstraZeneca vaccine is effective for older people as well," the prime minister said during a daily interagency meeting on the coronavirus response at the government complex in Seoul.

"South Korea is withholding AstraZeneca vaccine shots for people aged 65 or older, but I ask the Korea Disease Control and Prevention Agency to assemble opinions of experts again as there have been policy changes (on the issue) in other countries."

The prime minister cited France's recent authorization of the AstraZeneca vaccine for people aged between 65 and 74, and Germany's ongoing review of the vaccine's use for individuals aged 65 and over as the background of his latest instruction.

The government has, however, withheld the authorization of the AstraZeneca vaccine's use for people aged 65 and older, pending further study results, amid a continuing controversy over the vaccine's efficacy for seniors. 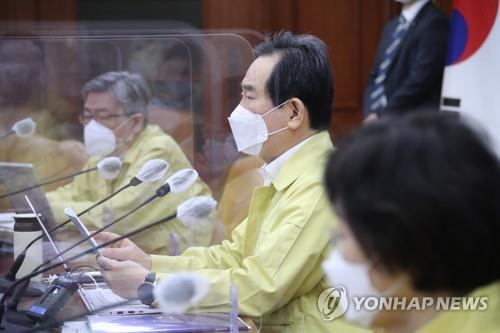 Providing a fresh perspective, Britain's Public Health England on Monday released the result of a real-world study showing that the Oxford-AstraZeneca vaccines are "highly effective in reducing COVID-19 infections among older people aged 70 and over."

During a separate interview with radio broadcaster TBS the same day, the prime minister also confirmed that there will be no delays in the country's bid to form herd immunity by November.

He said the country is likely to export its locally developed low dead space (LDS) syringes to the United States and Japan. The special syringes were designed to minimize wasted vaccine doses by reducing space between the needle and the plunger.

The prime minister added that the option to include school teachers in priority groups for vaccinations needs to be "positively considered," as the country is seeking to expand in-person classes this year.