SEOUL, March 3 (Yonhap) -- Kiwoom Heroes' rookie right-hander Jang Jae-young lived up to his billing as a flamethrower in his spring training debut on Wednesday, though the teenager also showed his wild side.

Jang, the Heroes' territorial draft pick last year, touched 154 kilometers per hour (95.7 miles per hour) with his fastball in an intrasquad game at Gocheok Sky Dome in Seoul. The 18-year-old faced four batters, recording a strikeout, a groundout, two walks and two wild pitches, before being lifted with a slight cut in his right thumb. 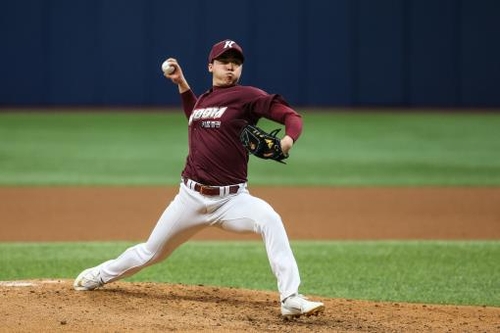 A Heroes official said Jang was taken out as a precaution and that he hadn't suffered any blisters on his hand.

Jang made 18 pitches -- 10 fastballs, four curveballs, three sliders and one forkball -- in the bottom of the fourth inning.

He struck out Lee Byung-kyu looking on a breaking ball to open that inning. Park Jun-tae then grounded out to first base, with first baseman Lee Myuong-ki making a fine grab and tossing it to Jang covering the bag.

With two quick outs, Jang went ahead 0-2 on Seo Geon-chang, but then threw four straight balls to walk him.

Then facing veteran slugger Park Byung-ho, Jang threw two wild pitches, including one well above Park's head. The fourth ball to Park also went to the backstop and put runners at the corners for Huh Jeong-heop. 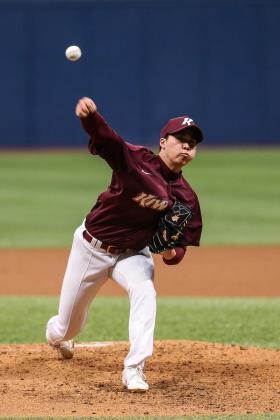 But before throwing a pitch to Huh, Jang signaled to the bench for help. After trainers looked at Jang's hand, the inning was declared over in the informal, six-inning affair.

Jang is the son of ex-Heroes manager Jang Jung-suk. In an indication of their expectations for the pitcher, the Heroes awarded him a signing bonus of 900 million won (US$802,100) last fall, the second-largest rookie signing bonus in Korea Baseball Organization (KBO) history.

Jang, the pitcher, said afterward his thumb was fine. He first developed problems after the second batter of the inning, but he decided to keep on pitching because he wanted to challenge himself.

"I regarded this scrimmage as a regular season game, and I wanted to see how I would respond to difficult situations," Jang said. "That's why I didn't call for trainers right away. But everyone is worried about me now. I'll let them know right away the next time something like this happens."

"It was just a practice game, and he should have called for help right away," Hong said. "From the way he tried to get the third out (despite the thumb issue), I could tell he would need more experience."

"Against Seo, I was trying to do too much after getting ahead 0-2," Jang said. "Park hit me pretty well in an earlier live batting practice, so I didn't want to give him any fastballs. I tried sliders and curveballs but ended up falling behind in the count."

As for his impressive velocity, Jang said, "I did throw hard today, but I won't try to increase my velocity. I just want to throw more pitches in and around the zone."

Prior to the scrimmage, Hong remained noncommittal about Jang's chances of breaking camp with the club. Hong said he would need to see how Jang handles different situations on the mound.

The official exhibition season begins on March 20, with the regular season set to begin on April 3. 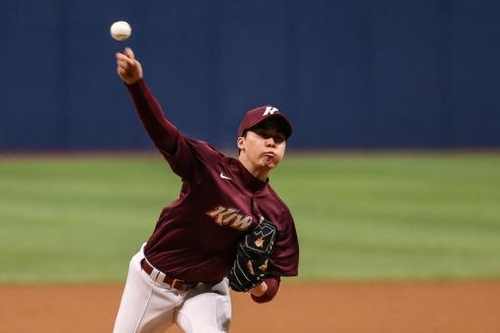