SEOUL, March 3 (Yonhap) -- Samsung Electronics Co. is likely to suffer a prolonged shutdown of its chip plant in the United States following a power outage, industry insiders said Wednesday, amid growing speculation that it is pushing to expand its semiconductor facility there.

Samsung and other chipmakers in Texas are expected to need a "couple of weeks" to return to their normal operations following power blackouts in the region caused by a winter storm last month, according to Reuters and foreign media reports.

Samsung's chip plant in Austin, Texas, has not been running since Feb. 16, which is the first time in the factory's history that production was halted.

To minimize the damage and return to normal levels of production, the world's largest memory chip producer reportedly sent engineers to the Austin facility.

Earlier, market researcher TrendForce said that the severe weather is estimated to impair about 1 or 2 percent of the global 12-inch wafer foundry capacity. But with the shutdown likely to be extended, industry observers now expect the chip industry may suffer further supply shortages. 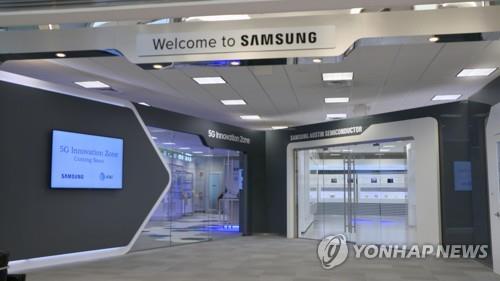 Against this backdrop, Samsung recently submitted a revised tax credit proposal to authorities in Texas over its potential new chip plant in the region, according to industry sources.

In the documents, the South Korean tech giant said it is inspecting other U.S. states for its possible investment, including two areas in Arizona and one site in New York, apparently trying to beef up its bargaining power.

"Those from Austin requested to provide more data, so we just submitted an updated proposal," a Samsung official said. "Some of the expressions have changed, but there are no major changes in our content."

Last month, it was reported that Samsung asked authorities in Texas to grant tax abatement over 20 years, which would be worth a total of US$805.5 million, for its new chip facility in Austin, Texas.