A mental health counselor in her neighborhood in Cheongju, 150 kilometers south of Seoul, called 119 to report that Byun had not been reachable since Feb. 28, and firefighters found her dead at her house at 5:49 p.m., according to police officers.

The local mental health care clinic said Byun made an attempt to kill herself three months ago.

No suicide note was found, and police are investigating the death.

The Army made the discharge decision in January last year after judging that Byun's loss of male genitals belongs to the Level 3 physical disability under the military laws.

In December, the National Human Rights Commission of Korea (NHRCK) said the Army's decision not to allow Byun, then a staff sergeant, to continue to serve in the military as a female soldier had no legal grounds.

The NHRCK's opinion came after the Center for Military Human Rights Korea, a civic group, had filed a petition alleging Byun's forced military discharge was discrimination against transgender people.

Byun's case drew extensive attention because she was the first South Korean active-duty soldier to have sex reassignment surgery while in service. 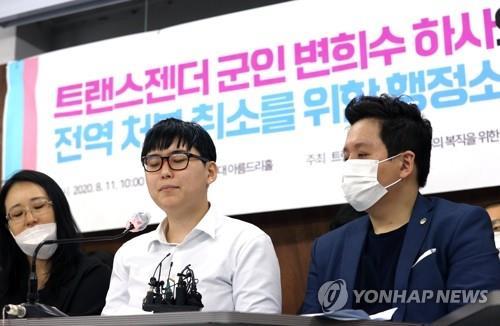