SEOUL, March 4 (Yonhap) -- The defense ministry said Thursday it has stripped a two-star Army general of his command to hold him accountable for a security failure in connection with a recent border crossing by a North Korean man.

The 22nd Infantry Division guarding the east coast border with the North garnered criticism following revelations that soldiers initially failed to notice the North Korean man even though he was repeatedly caught on surveillance cameras after coming ashore by swimming across the sea border last month.

The man was captured hours later and expressed a desire to defect.

Following an onsite investigation, the ministry said it has relieved the general commanding the Army division in the eastern town of Goseong of his commandership and will take disciplinary measures against other senior officers responsible for the security lapse.

"The division commander has a direct responsibility over the poor maritime security and counterinfiltration operations, and is also accountable for negligently overseeing the management of drainage conduits," a ministry official said.

The North Korean man in his 20s, whose identity was withheld, passed through a drainage conduit beneath the barbed wire fences set up along the shore.

Five officers, including the commander, will be referred to the disciplinary committee while 18 others involved in the incident will be handed over to the ground operations command for review.

The chief of the Army's 8th Corps which has the 22nd division under its wing will receive a "stern warning" from the Army Chief of Staff Gen. Nam Yeong-shin, the ministry said.

"The defense ministry takes this situation gravely. We will intensively push forward with fundamental supplementary measures with a strong determination and do our best so that our military can regain trust from the public," it said. 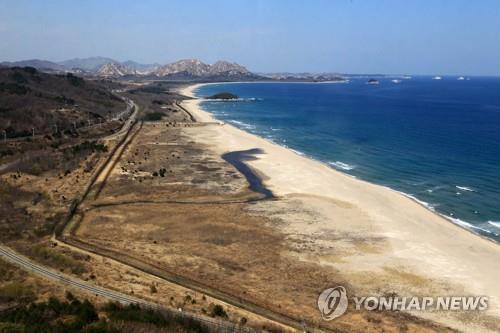