(ATTN: UPDATES with reports of a bipartisan call from U.S. lawmakers urging a swift conclusion of South Korea-U.S. SMA negotiations in last 3 paras)
By Byun Duk-kun

WASHINGTON, March 4 (Yonhap) -- South Korea will work to quickly conclude its prolonged negotiations with the United States to set Seoul's share of the cost in maintaining U.S. forces on the Korean Peninsula, although some issues remain, Seoul's chief negotiator said Thursday.

"(There) are many issues and so we plan to resolve them as much as possible through a face-to-face meeting," Ambassador Jeong Eun-bo said upon arrival in Washington for a new round of talks with his U.S. counterpart, Donna Welton. 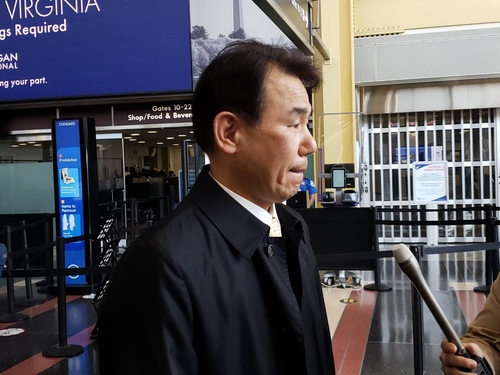 The meeting, set for Friday, will mark the ninth round of negotiations to renew the countries' Special Measures Agreement but the first in-person talks since President Joe Biden took office on Jan. 20. Jeong and Welton last spoke last month via a video link.

The South Korean negotiator refused to identify the remaining issues, only saying SMA negotiations often have to consider special circumstances.

"(The countries) renew detailed SMA every five years or three years and so discuss various issues that surface in the process of implementing the agreement to reflect such issues," he told reporters after arriving in Washington.

The allied countries launched their negotiations before the last SMA expired at the end of 2019, but have been unable to reach an agreement.

Former U.S. President Donald Trump had initially demanded Seoul to pay US$5 billion a year for the upkeep of the 28,500-strong U.S. Forces Korea, more than five times the $870 million South Korea paid in 2019 under the last SMA.

The countries negotiators had agreed on a 13 percent increase from the 2019 amount, but Trump had rejected the deal.

Jeong's trip to the U.S. is widely believed to signal the conclusion of the drawn-out negotiations in the near future.

A spokesperson for the U.S. State Department has confirmed that the countries are "very close" to a deal, when asked earlier by Yonhap News Agency.

"From a perspective of principles, I will work to remove most of the remaining issues," Jeong said.

Later, Rep. Ami Bera (D-CA), chairman of the House Foreign Affairs Subcommittee on Asia, Pacific, Central Asia and Nonproliferation, and Rep. Steve Chabot (R-OH), ranking member of the House subcommittee, sent an open letter to Secretary of State Antony Blinken to urge an "expeditious" conclusion of the SMA negotiations between the allies.

"In particular, we encourage your Administration to continue prioritizing the speedy conclusion of negotiations before April 1, lest U.S. Forces Korea would need to again furlough the South Korean nationals supporting the command."