SEOUL, March 5 (Yonhap) -- South Korean stocks fell for the second consecutive session Friday as investors were disappointed by the absence of comments from the U.S. Federal Reserve to help stave off inflation concerns. The Korean won fell against the U.S. dollar.

The KOSPI touched its daily low of 2,982.45 points due to speculation of post-pandemic inflation, with yields of the U.S. benchmark 10-year Treasury having surged above the 1.5-percent threshold.

Trading volume was moderate at about 1.2 billion shares worth some 16.5 trillion won (US$14.7 billion), with losers outnumbering gainers 565 to 288. 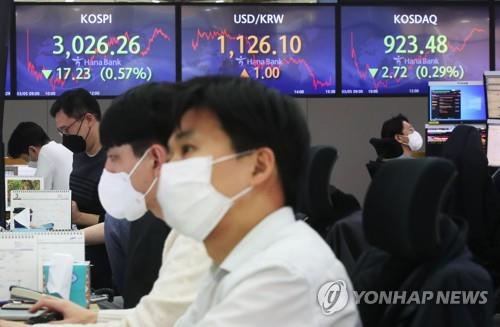 The local currency closed at 1,126.1 won against the U.S. dollar, down 1 won from the previous session's close.