JEONGEUP, South Korea, March 5 (Yonhap) -- A fire tore through the main hall of Naejang Temple, one of South Korea's oldest Buddhist temples, on Friday in a suspected arson attack by a disgruntled monk, firefighters said.

Firefighters received the initial report of the fire at the temple in the southwestern city of Jeongeup at around 6:30 p.m.

The blaze burned down the wooden Daewungjeon building, while firefighters were trying to stop it from spreading to other structures, the authorities said. No casualties were reported. 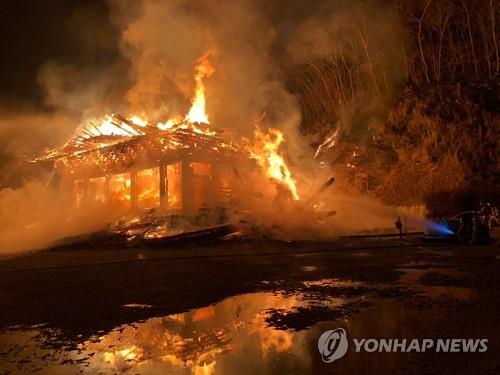 The fire was largely under control at 9:10 p.m., but police said the affected building is highly likely to crumble down.

Police later apprehended a suspected arsonist, a 53-year-old monk, at the scene.

According to the initial interrogation, he set fire using inflammable materials, presumably gasoline, under the influence of alcohol. The monk was found to have had a feud with other members of the temple recently.

"It is presumed that (the monk) might have committed the arson in anger over the internal feud," a police officer noted.

Another fire caused by a short circuit destroyed Daewungjeon in October 2012, along with all its Buddhist statues and paintings inside, before the building was restored in 2015. 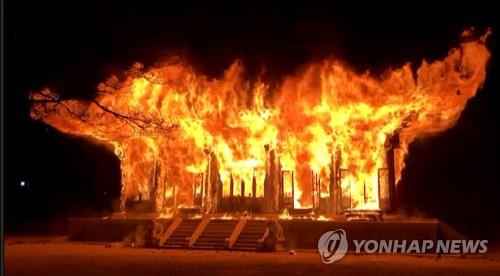