SEOUL, March 7 (Yonhap) -- South Korea's Red Cross is willing to take care of a cemetery for North Korean soldiers killed in the Korean War, its secretary general said Sunday, as the graveyard remains largely abandoned amid an administrative row.

The cemetery, established in 1996 in the border county of Paju, holds 843 sets of remains of North Korean soldiers killed in the 1950-53 war. The remains of some Chinese soldiers had also been held there, but they were repatriated to China in 2014.

In March 2019, the government of Gyeonggi Province, which has jurisdiction over the area, agreed to take over the maintenance right of the cemetery from the defense ministry, saying it wants to play a meaningful role in inter-Korean reconciliation.

The provincial government also agreed to give the ministry a tract of land in return.

But implementation of the agreement has been delayed as the two sides displayed differences over how to interpret the deal, leaving the cemetery unattended for nearly two years.

On Sunday, Kim Tae-kwang, secretary general of the Korean Red Cross, said the organization wants to take care of the cemetery on humanitarian grounds.

"If the Korean Red Cross, which is not bound by political situations or ideology, maintains the cemetery for North Korean soldiers from the humanitarian perspective, it will also contribute to improvement in inter-Korean relations," Kim told Yonhap News Agency.

Kim said he hopes that related authorities, such as the defense ministry, the Gyeonggi provincial government and the unification ministry, will positively consider the offer. 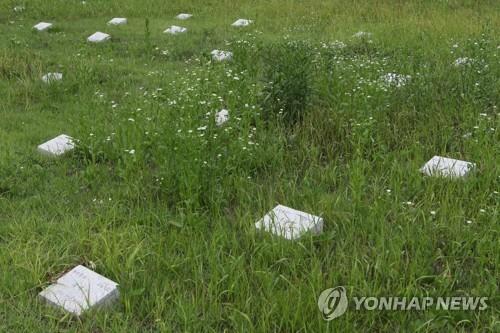