(ATTN: UPDATES with remarks from a State Department spokesperson in paras 6-10)
By Byun Duk-kun

WASHINGTON, March 7 (Yonhap) -- South Korea and the United States have reached an agreement on Seoul's share of the burden in maintaining U.S. troops on the Korean Peninsula, Seoul's foreign ministry said Sunday.

The agreement came in their latest negotiations held in Washington.

"In the first in-person meeting to be held in almost a year amid the COVID-19 pandemic, negotiators from South Korea and the United States held talks on the 11th South Korea-U.S. Special Measures Agreement (SMA) based on their discussions so far, and as a result reached an agreement in principle," the ministry said in a press release.

It added the sides plan to initial their agreement after first each going through a process of internal reviews.

The ministry did not provide any other details.

The State Department later confirmed the sides have reached a consensus with a "meaningful increase" in South Korea's contribution.

"We are pleased that U.S. and Republic of Korea negotiators have reached consensus on a proposed text of a Special Measures Agreement that will strengthen our Alliance and our shared defense," a department spokesperson told Yonhap News Agency in an email, asking not to be identified.

"This proposed agreement, containing a negotiated meaningful increase in host nation support contributions from the Republic of Korea, reaffirms that the U.S.-Republic of Korea Alliance is the linchpin of peace, security, and prosperity for Northeast Asia and a free and open Indo-Pacific region," the department official added.

The official said the proposed agreement reflected the Biden administration's commitment to reinvigorating and modernizing the U.S.-South Korea alliance.

"The United States and ROK are now pursuing the final steps needed to conclude the agreement for signature and entry into force that will strengthen our Alliance and our shared defense."

The sides had earlier agreed on a 13 percent increase in Seoul's share of the cost to upkeep some 28,500 U.S. forces in South Korea, but the agreement was rejected by then U.S. President Donald Trump, who had initially demanded South Korea to pay US$5 billion per year, which would have marked more than a fivefold increase from the $870 million Seoul paid in 2019. 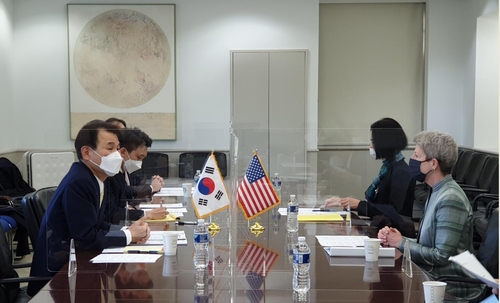