The 48-year-old man, surnamed Lee, was found dead by police at his "gosiwon," a low-cost accommodation facility, in southeastern Seoul on Saturday afternoon.

The advocacy group urged Coupang to apologize for the "predicted death from overwork" and offer compensation and measures to prevent a recurrence of similar cases during a press conference held in front of the company's headquarters in southeastern Seoul.

It then called for a special labor inspection of Coupang, saying as many as six company employees have died from overwork last and this year.

Early autopsy results showed that Lee, who did not have any underlying illnesses, suffered brain hemorrhage, which is a typical symptom of sudden death by overwork, Jin Kyung-ho, the group's head, said. 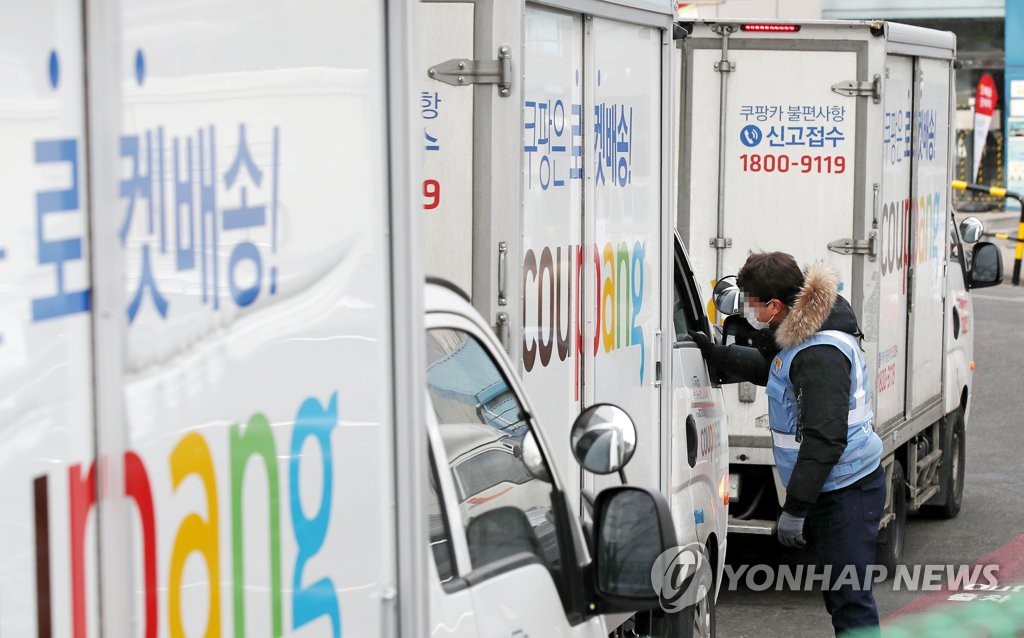 Lee became the latest delivery worker to die from apparent overwork. Last year, 16 couriers died, according to the Taekbae Union, which represents couriers here, amid increased demand for deliveries due to the coronavirus pandemic.

Lee left his home in Changwon, about 400 kilometers southeast of Seoul, last year to work as a contract worker for Coupang. He was later given a full-time position on the nighttime shift, the group said.

Lee's wife called the police on Saturday after she could not reach her husband.

"The deceased often spoke to his wife about the difficulties of late-night work," the group said. "He went to work at 9 p.m. to handle only late night and early morning deliveries and normally returned to his gosiwon around 7 a.m."

Citing testimony of his colleagues, the group also claimed that the e-commerce operator pressured Lee to handle an excessive workload, making it impossible for him to even use his legally-mandated rest hour.

Lee earned 2.8 million won (US$2,480) a month, which was just over the minimum wage considering he worked at night, according to the group.

Coupang expressed regret at Lee's death and said it will cooperate with future procedures to identify the cause of his death but claimed he worked about 40 hours per week, which is shorter than the average working hours of parcel delivery workers, over the past 12 weeks.