SEOUL, March 8 (Yonhap) -- This week's conclusion of defense cost-sharing talks between South Korea and the United States put their alliance back on a firmer and more stable footing after an embarrassing stretch of friction caused by former President Donald Trump's criticism of allies as free riders, analysts said Monday.

The tentative deal on the sharing of the cost for stationing the 28,500-strong U.S. Forces Korea (USFK) came just days after President Joe Biden vowed to "reinvigorate and modernize" alliances in the face of an assertive China, an intransigent North Korea and other shared threats. 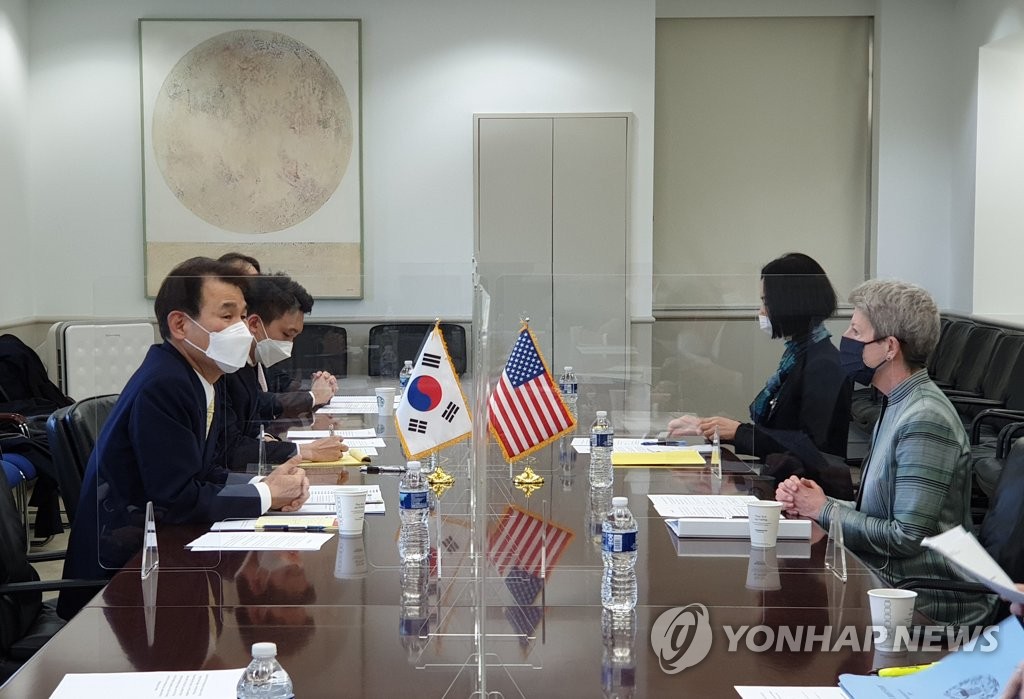 Signaling a new reality of the alliance, Seoul and Washington reached an agreement "in principle" over the cost-sharing deal on Sunday, only 46 days after the launch of the Biden administration, according to the foreign ministry.

The two sides have not revealed the details of what is likely to be a multi-year deal, but they are expected to officially sign it during a visit to Seoul by U.S. Secretary of State Antony Blinken and Defense Secretary Lloyd Austin that is expected to take place later this month.

"The Biden administration believes that the former Trump administration put needless pressure on South Korea, Japan and other allies and undermined the spirit of the alliances needed to keep an assertive China in check," Nam Chang-hee, professor of international politics at Inha University, said.

"There has apparently been a serious reflection on the part of Washington about how the former president undercut America's alliances by treating them dismissively and squeezing them to pay more," he added.

The conclusion of the cost-sharing deal, called the Special Measures Agreement (SMA), underscored Biden's top priority on shoring up America's democratic alliances, which have been undermined by Trump's transactional, inward-looking "America first" approach.

The Wall Street Journal reported that the new SMA would last through 2025, without specifying details like the total amount of the cost South Korea agreed to shoulder.

"By quickly sealing the deal, the government will address the absence of an agreement, which continued for more than a year, and contribute to strengthening the South Korea-U.S. alliance, the linchpin of peace and prosperity on the Korean Peninsula and in Northeast Asia," the ministry said in a press release.

The negotiations, which began in September 2019, had been stalled, as the Trump administration reportedly demanded more than a fivefold increase from the 2019 level to US$5 billion and later lowered its demand to $1.3 billion, a rise of about 50 percent.

The deadlock in the SMA negotiations led to a temporary furlough of South Koreans working for the U.S. military here, which created concerns about possible disruptions in day-to-day USFK operations.

Moreover, the impasse triggered fears of a possible fissure in the allies' cooperation on other fronts, such as diplomacy to persuade North Korea to give up its nuclear weapons and foster lasting peace on the Korean Peninsula.

The monetary demand to the allies, including the North Atlantic Treaty Organization, also cast doubts over the credibility of the United States' security commitments and spawned speculation that America was viewing its allies as strategic liabilities.

But Biden took swift steps to squelch that speculation, vowing not to "extort" allies with "reckless threats to remove troops" in his pre-election remarks.

That pledge culminated in Sunday's conclusion of the SMA negotiations and last month's similar cost-sharing deal between Washington and Tokyo, as well as his repeated verbal reiteration of his administration's commitment to alliances.

In a key foreign policy speech last month, Biden pledged to rebuild the "muscle of democratic alliances that have atrophied over the past few years of neglect" while calling the allies America's "greatest strategic asset."

That goal was also repeated in his recently issued interim national security strategic guidance, in which he pledged to "reinvigorate and modernize our alliances" to confront shared current and future challenges.

Washington's commitment to alliance cooperation, however, is not without strings attached, observers said.

Calling allies "unique assets" that the U.S. boasts, Washington could seek to strengthen a coalition of allies like Seoul to counter the growing influence of Beijing, which Biden has cast as the "only competitor potentially capable of combining its economic, military and technological power to mount a sustained challenge to a stable and open international system."

This could pose a nettlesome geopolitical dilemma to South Korea, which has remained largely ambivalent over issues of the great power rivalry as it wants to keep good relations both with its ally, the U.S., and its largest trading partner, China.

Washington could also step up pressure on its key Asian allies, Seoul and Tokyo, to do more to address their long-running historical rows stemming from Japan's 1910-45 colonial rule to promote trilateral security cooperation against Beijing.

Though its detailed schedule was not finalized, the trip to Seoul and Tokyo by Blinken and Austin is expected to be carefully choreographed to emphasize Washington's will to restore regional alliances and promote its trilateral cooperation with the two allies.

"That trip could become a symbolic event to underscore the key tenet of the Biden administration's policy toward the alliances in East Asia and beyond," Professor Nam noted.