SEOUL, March 8 (Yonhap) -- The unification ministry urged North Korea to take a "wise and flexible" approach toward a springtime combined military exercise that South Korea and the United States kicked off in a scaled-back manner Monday.

North Korea has long demanded an end to the joint military drills between the two allies, denouncing them as a rehearsal for invasion. During a rare party congress in January, leader Kim Jong-un repeated such calls, citing it as a crucial matter to improve inter-Korean ties.

"As the combined exercises are being carried out in a flexible and scaled-back manner in both the size and type of drills, we will strive to support efforts for peace on the Korean Peninsula," Lee Jong-joo, the ministry's spokesperson, told a regular press briefing.

"We call on North Korea to show a wise and flexible approach corresponding to our efforts to establish stable and lasting peace on the Korean Peninsula," she added.

The computer-simulated Combined Command Post Training (CCPT), set to continue until March 18, involves a "minimum level of troops" compared with previous ones given the coronavirus situation, and no outdoor drills will take place, according to South Korea's military.

Since 2019, major exercises have not included outdoor drills amid peace efforts with North Korea.

Last year, Seoul and Washington also decided to cancel their springtime exercise due to COVID-19 and held the summertime one in an adjusted manner.

Seoul and Washington have stressed that the springtime exercise is a regular one and is defensive in nature. Observers voice concern that North Korea could use the drill as a pretext for provocations in the early months of the administration of U.S. President Joe Biden.

North Korea's state media has not yet responded to the latest combined military exercises. 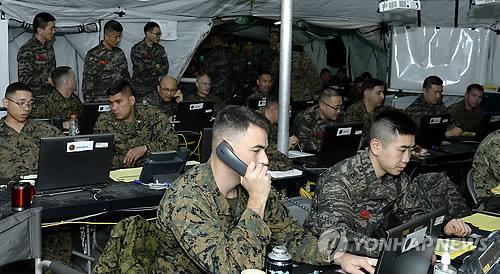