SEOUL, March 8 (Yonhap) -- A progressive lawmaker said Monday she will push for a law revision in collaboration with two civic groups to toughen punishment of public officials who use inside information to speculate on land that is under review or chosen for a state housing project.

Rep. Sim Sang-jeung, former head of the minor opposition Justice Party, and two civic groups -- People's Solidarity for Participatory Democracy and Lawyers for a Democratic Society -- announced the plan to revise the Special Act on Public Housing during a joint news conference in Seoul.

The move comes as the government is looking into a far-reaching land speculation scandal involving employees of the state-run housing developer Korea Land and Housing Corp. (LH).

The probe is based on allegations, raised by the two progressive civic groups last week, that about 10 LH officials bought vast swathes of land in the cities of Gwangmyeong and Siheung, near Seoul, possibly using insider information, before a massive state housing development project was announced there last month.

Under the enactment proposal soon to be submitted to the National Assembly, current and former employees of the Ministry of Land, Infrastructure and Transportation, as well as municipalities and state firms in charge of public housing projects, such as LH, will be barred from using inside information to purchase land under their own names or those of their spouses, family members and others.

They will be also be prohibited from relaying such off-the-record information, including on public housing projects under review, to outsiders, according to Sim and civic group officials.

Any offenders will be subject to imprisonment of one year or longer or a fine equivalent to up to five times the profits gleaned through the prohibited land purchases. The current law caps the prison sentence on such illegalities at five years or a fine of 50 million won (US$44,181).

The prison sentence goes from five years to a life sentence if the profits from illegal land speculation surpass 5 billion won, along with a fine.

"In order to stop the recurrence of speculation by public officials related with public housing projects, an institutional reform needs to continue to step up punishments, confiscate the profits and keep up monitoring of (illegal) transactions," said Sim and the officials from the two civic groups. 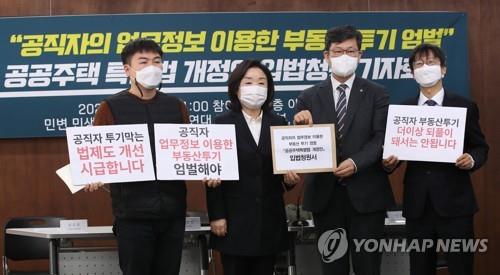