(ATTN: UPDATES with details of investigation in last 6 paras)

SEOUL, March 8 (Yonhap) -- Prime Minister Chung Sye-kyun on Monday ordered the creation of a police-led investigative team to get to the bottom of a massive land speculation scandal involving public officials.

Chung gave the order to Nam Gu-jun, the inaugural chief of the National Office of Investigation (NOI) under the National Police Agency, during a meeting in which Nam briefed the prime minister on the police's own investigation plans regarding the issue. 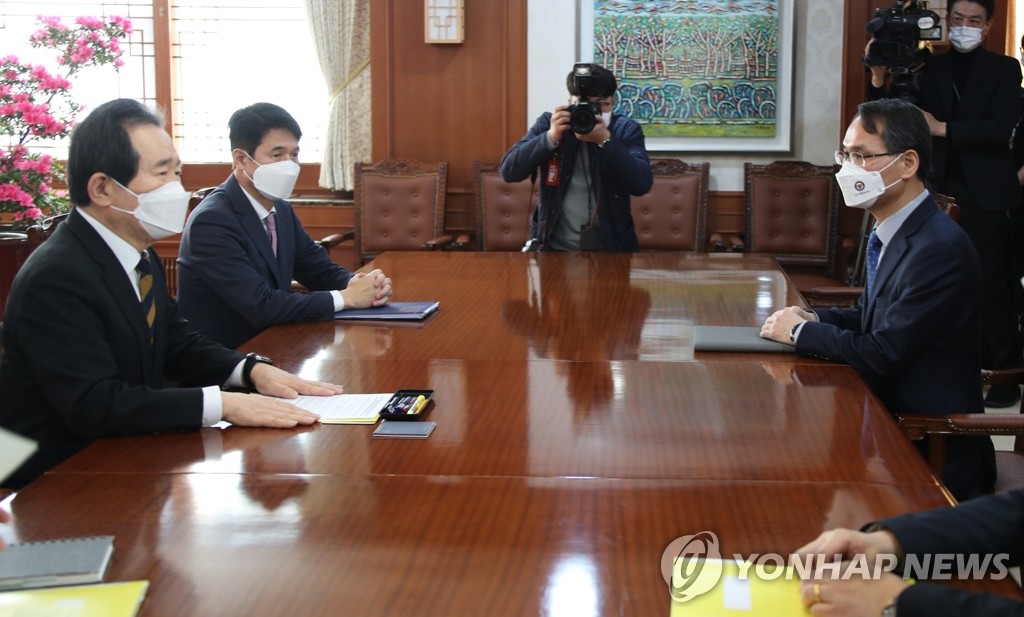 The scandal centers on allegations that more than a dozen employees of the state-run Korea Land and Housing Corp. (LH) used classified information to buy about 10 billion won (US$8.88 million) worth of farmland in Gwangmyeong and Siheung in Gyeonggi Province, southwest of Seoul, from April 2018 to June 2020. The purchases were allegedly made before the government announced plans for a major development project there.

Last week, the government launched an interagency team involving the prime minister's office, the land ministry and local governments to look into the allegations.

Chung said that team will be limited in its ability to uncover illegalities, including borrowed-name financial transactions and unregistered resales, due to its lack of investigative power over civilians, according to his office.

The prime minister ordered Nam to "thoroughly investigate all illegal and law-evading speculative acts" in the case by expanding and reorganizing the NOI's special investigation team to include the National Tax Service (NTS), the Financial Services Commission (FSC) and other relevant agencies, it said.

The government interagency team plans to wrap up its preliminary investigation into the LH employees this week. It will then transfer the investigation results to the NOI to continue the probe with the new team involving the NTS and FSC.

Choi Chang-won, a vice minister heading the government team, told a press briefing that the preliminary investigation will cover 23,000 officials, including around 9,900 LH employees and 4,500 land ministry employees.

The team will also look into all transactions since December 2013, he said, when former President Park Geun-hye was in office.

Choi, who works at the prime minister's office, said the time frame was chosen to allow "sufficient scope" considering that any speculative deals would have been reviewed before the first announcements on the development project were made in December 2018.

Earlier Monday, Nam held his first meeting with reporters since taking office on Feb. 26, saying he will work with a "sense of duty" to demonstrate the police's investigative capabilities through the LH probe.

He objected to suggestions that the investigation should be led by the prosecution, saying the police played a large role in investigating similar land speculation cases when previous governments pursued the first and second "new town" projects.

The current project is the third of its kind and covers five other areas in Incheon and Gyeonggi.