WASHINGTON, March 8 (Yonhap) -- South Korea and the United States have reached a "fair" agreement on the sharing of the cost to maintain U.S. troops on the Korean Peninsula, a South Korean diplomat said Monday.

"We did our utmost. I wish to say we have reached an agreement between South Korea and the United States that is reasonable and fair and is acceptable to both sides," Jeong told reporters shortly before heading home. 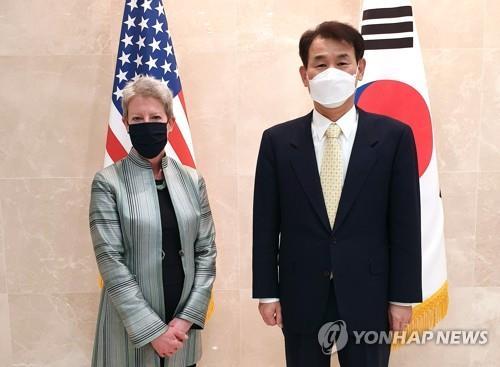 The South Korean diplomat arrived here on Thursday for his first in-person talks with his U.S. counterpart, Donna Welton, in nearly a year. The two last talked virtually in February.

The countries said on Sunday they have reached a mutual agreement and that it will be initialed after reviews by their respective governments.

Seoul and Washington had agreed to a 13 percent increase in Seoul's share of the cost to upkeep some 28,500 U.S. troops on the Korean Peninsula, but the agreement was rejected by then-U.S. President Donald Trump, who had demanded South Korea pay US$5 billion a year, more than five times the $870 million it paid under the last SMA, which expired at the end of 2019.

Jeong said the details of the new agreement may be made public in less than two weeks, saying it will likely be
initialed or even signed before U.S. Secretary of State Antony Blinken visits South Korea with Defense Secretary Lloyd Austin.

The U.S. has yet to officially announce their trip to Asia, but earlier reports have suggested they will likely visit Japan and South Korea March 15-18.

Some reports have also suggested the new agreement may include South Korea's purchase of U.S. weapons systems.

Jeong dismissed the report, saying the SMA deals only with support for U.S. Forces Korea.