WASHINGTON, March 8 (Yonhap) -- The new defense cost-sharing agreement between South Korea and the United States will be effective for six years if signed, a spokesman for the U.S. State Department said Monday.

The first detail of the agreement came one day after the countries said they have reached a consensus on the agreement that will set South Korea's share of the burden in maintaining U.S. troops on the Korean Peninsula.

"The United States and Republic of Korea negotiators did reach a consensus on a proposed text of a new six-year Special Measures Agreement or SMA, that will strengthen our alliance and our shared defense," department spokesman Ned Price told a daily press briefing.

The countries earlier refused to release any details of the proposed agreement, saying it must first undergo internal reviews by their respective governments.

The new SMA, if signed, will be the 11th of its kind. The allies usually renew the agreement every five years, but the last SMA expired at the end of 2019.

"The United States and the Republic of Korea together, we're now pushing final steps needed to conclude the agreement for signature and for entry into force," Price said, referring to South Korea by its official name. 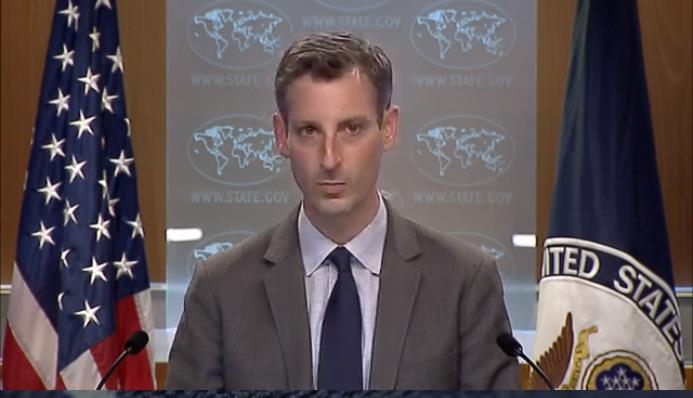 The department spokesman did not provide any other details, but said the Biden administration is unlikely to have made unreasonable demands.

"I would say that the South Koreans are our allies. So in the context of a relationship with a close ally, with a treaty ally like South Korea, I don't think the United States would make demands, and certainly I don't think that would help strengthen the underlying alliance," he said when asked if the new U.S. administration made less harsh demands than those of the former Trump administration.

The negotiations for a new SMA began before the last agreement expired at the end of 2019, but the countries have been unable to reach an agreement due to a large difference over Seoul's share of the burden in the cost to upkeep some 28,500 U.S. forces in South Korea.

The countries' negotiators had reached agreement on a 13-percent increase in Seoul's contribution but it was rejected by then-President Donald Trump, who had initially demanded Seoul pay US$5 billion a year, up more than five times the $870 million Seoul paid in 2019.

Price said the new administration has engaged with South Korea in "good faith."

"I think you will be hearing more about them, and I imagine the details of this you will soon learn to be an agreement that benefits both sides," he told the press briefing.

His remarks came hours after Seoul's top negotiator in SMA talks, Jeong Eun-bo, said the deal reached in Washington on Sunday, will be an agreement "that is reasonable, fair and acceptable to both sides."