SEOUL, March 9 (Yonhap) -- The indie music scene in South Korea has not been spared from the fallout of the COVID-19 pandemic, more so due to the government's strict social distancing guidelines and the usually tight budgets for indie musicians.

In contrast to mainstream K-pop artists, who have successfully mobilized tens of thousands of fans around the world with state-of-the-art online concerts, most indie musicians have been forced to cancel gigs amid the pandemic.

Famous live halls in the Hongdae area in western Seoul, such as V Hall, that have long provided stages for aspiring musicians were forced to shut down as yearlong social distancing guidelines made it tough for owners to keep up with mounting financial losses. 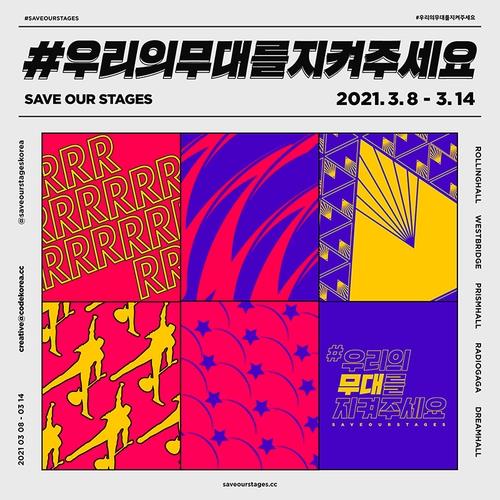 In a recent case, a small live hall in Hongdae was told by local government authorities to cancel one of its gigs just 30 minutes prior to the event, according to industry officials. The Record Label Industry Association of Korea urged the Mapo Ward office to apologize over the issue and raised the need for more consistent antivirus guidelines.

Under the Level 2 social distancing rules in place in the greater Seoul area until Sunday, indoor standing concert halls can operate until 10 p.m. as long as the audience members are seated one seat apart from one another. Level 2 is the third-highest measure in a five-tier system.

However, many small live halls in the popular Hongdae area are classified as restaurants with stages rather than indoor standing concert halls. This has blocked them from hosting in-person gigs due to the current antivirus guidelines that ban restaurants from hosting performances. In many cases, these venues opened up their stages on the condition they do not sell food or drinks.

"We ask that (local governments) set up a realistic guideline on running performance venues upon consultation with industry officials, so that small-sized concert halls no longer suffer damage," the industry association said in a March 8 statement.

It also asked the Mapo Ward office, which initially gave permission before canceling the gig, to apologize for reversing its policy due to internal miscommunication. 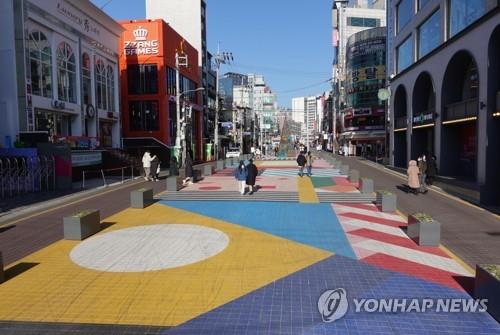 To help protect the stages that have long provided them a place to sing, indie musicians have teamed up to launch a weeklong online charity concert. Titled #SaveOurStages in Korean, nearly 70 acts will be holding relay gigs at five live halls throughout this week.

Acts taking part in the initiative include some of the scene's most renowned acts like punk bands Crying Nut and No Brain as well as those that have also built successful careers in the mainstream music scene, like hip-hip groups DJ DOC and Dynamic Duo as well as rock band Jannabi.

Hosted by C.O.D.E., a nonprofit organization, that said it was inspired by the #SaveOurStages campaign in the United States, the event has secured support from music streaming giants like Melon and Bugs. Even Prime Minister Chung Sye-kyun voiced support for the campaign in a special video.

"We believe that the potential of Korean music is not limited to a few stars, but can also come from a lot of musicians who are growing as they meet the audience at the independent music venues," the organizers said on their website. "Unfortunately, however, we hear that these venues in Korea are disappearing one by one."

"Music is a valuable cultural asset that can bring many people together during difficult times and give them comfort and hope ... All you have to do is promote the festival and enjoy it."

Tickets for the livestream show are priced at 10,000 won (US$8.80) for one-day viewings and 50,000 won for access to all the gigs as well as two replays of the event, according to the organizers. As of Tuesday, they have raised 90.5 percent of their goal of 50 million won. 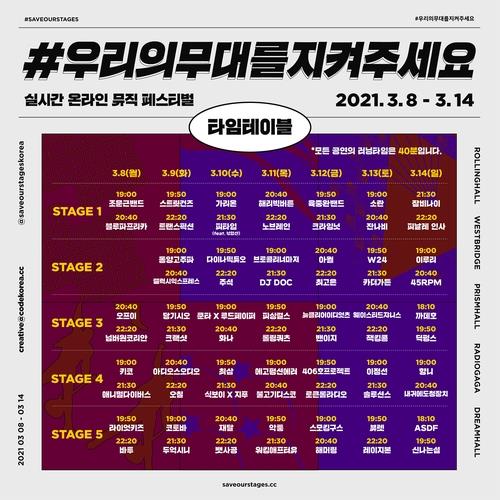 While most musicians have stepped up their social media presence to stay in touch with listeners, some have instead opted for the analog way: continuing to sing on stage by inviting only a small number of fans to in-person gigs.

Daybreak, a frequent headliner at indie music festivals, recently completed a monthslong project to meet 1,000 listeners in person. The band held 21 rounds of gigs with 49 audience members at each of them, meeting with 1,029 people in total.

Titled "Gop-na-show" in Korean, after the mathematical symbols to multiply, to divide and the English word show, the four-piece band had initially planned to wrap up the project in November, it had to postpone some of the scheduled shows due to a resurgence in COVID-19 cases.

Still, the band appeared happy to be able to find a way to stay on stage.

"If it's difficult to meet, we can find a way! If all roads are blocked, we can simply wait! And if we get to meet again, we can rejoice!" Lee Won-seok, a Daybreak member, wrote on his Instagram account after completing the project.

"As long as our minds don't wither, we'll be always able to find a way to meet again! Thank you so much, (I) was so, so happy!"

(News Focus) Save Our Stages: Indie music scene moves to save stages, songs amid pandemic

(News Focus) Save Our Stages: Indie music scene moves to save stages, songs amid pandemic