SEOUL, March 10 (Yonhap) -- South Korea has agreed to raise its payment for stationing U.S. troops here by 13.9 percent this year from 2019, the foreign ministry said Wednesday, in a six-year deal with the United States that cleared the way for the countries to cement their alliance.

Concluding 1 1/2 years of grueling negotiations, Seoul and Washington reached the deal, called the Special Measures Agreement (SMA), Sunday amid fears that a prolonged stalemate would undermine their focus on countering North Korea's security threats and other shared challenges.

"The agreement served as an opportunity for the two countries to reaffirm the importance of the solid South Korea-U.S. alliance as the linchpin for peace and prosperity on the Korean Peninsula and in Northeast Asia, and the need for the stable stationing of the USFK," the ministry said in a press release.

"It is assessed that by smoothly addressing the key pending alliance issue early on after the launch of the Biden administration, South Korea and the U.S. demonstrated the robustness of the firm alliance," it added.

Under the latest and 11th SMA, subject to parliamentary approval here, the two countries are to freeze Seoul's payment for 2020 at the 2019 level. The last one-year SMA lapsed at the end of 2019, leaving the USFK without a funding scheme since then.

This year, Seoul is to pay 1.183 trillion won, an increase of 13.9 percent from 2019. The jump reflects last year's 7.4 percent increase in Seoul's defense spending, as well as a 6.5 percent rise in the cost for Korean workers in the USFK.

The two countries also agreed to link Korea's SMA payments from 2022 through 2025 to the increased rates of Seoul's defense spending. Next year's payment will thus grow by this year's increase rate of 5.4 percent.

"The rate of defense spending increase reflects our financial capacity and defense capabilities, and is determined through parliamentary deliberations," the ministry said. "Thus, it is a reasonable standard that any citizen can verify and trust."

To prevent Korean USFK workers from being furloughed again absent a funding scheme, Seoul and Washington codified an SMA rule for the first time to enable the former to provide its share of the cost for them at a level set in the previous year.

Last year, thousands of the Korean workers went on temporary unpaid leave as the deadlock in SMA negotiations persisted amid the former Donald Trump administration's calls for a hefty increase in Seoul's contributions.

The official signing of the new SMA is likely to come during a visit to Seoul by U.S. Secretary of State Antony Blinken and Defense Secretary Lloyd Austin, which is expected to take place next week.

The latest SMA was struck during meetings between South Korea's top negotiator, Jeong Eun-bo, and his U.S. counterpart, Donna Welton, in Washington from Friday to Sunday -- their first face-to-face encounter since the Jan. 20 launch of the Biden administration. 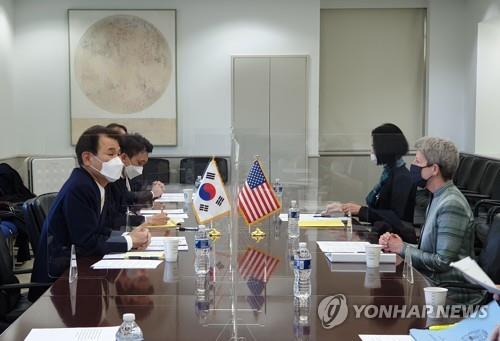 Jeong stressed that the new SMA was reached at a "reasonable and equitable" level.

"This is a result of the negotiations that we carried out confidently based on concrete grounds and logic, while preserving the SMA framework despite the longest period of negotiations this time," he said in a pre-taped speech.

"Through the mutually acceptable agreement, we have crafted a win-win deal," he added, pledging best efforts to quickly complete necessary domestic procedures for the deal's effectuation.

Before it takes effect, the deal should go through a set of local procedures, including presidential endorsement and parliamentary approval -- a process expected to take two months or so.

Just days ahead of the deal, Biden vowed to "reinvigorate and modernize" America's democratic alliances in the face of an assertive China, an intransigent North Korea and other shared threats.

Last year, Seoul and Washington reached a provisional deal that called for a 13.6 percent increase in the former's payment. But Trump rejected it, saying a "very wealthy nation" should pay more.

Washington was said to have initially called for more than a five-fold increase.

The total share of the payments aside, the two sides also haggled over Washington's apparent call to create a new clause mandating Seoul to cover partial costs of rotational U.S. troop deployments and other outlays currently outside the existing SMA framework.

But Seoul did not accede to that call and kept the contours of the SMA intact.

Following the announcement on the SMA details, critics took issue with Seoul having agreed to use the increased rate of its defense spending as a new standard to determine its payment for the USFK.

A senior Seoul official said the standard reflects South Korea's increased national power and is intended to quash the notion that it is a "free rider" on America's security commitments.

A union of the Korean USFK workers welcomed the new SMA.

"The deal will help enable the USFK to fulfill its duties and maintain readiness by preventing furloughs of Korean workers -- essential personnel of the USFK -- and ensuring they can work on a stable footing," it said in a statement.

The removal of a major thorn in the alliance is expected to accelerate efforts by Seoul and Washington to coordinate policy on the North's denuclearization and other issues, such as the COVID-19 pandemic and climate change. 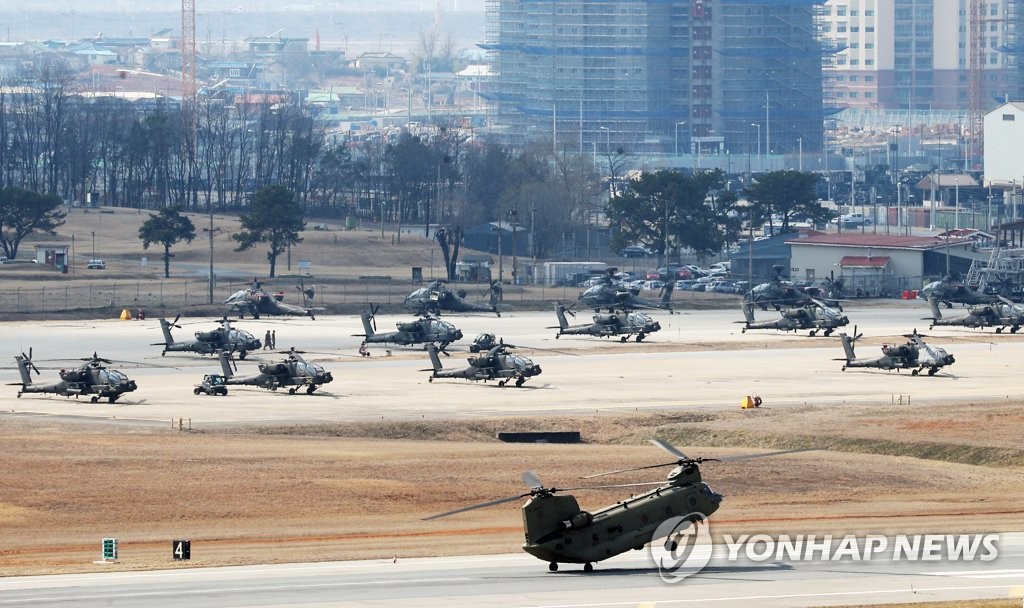