WASHINGTON, March 9 (Yonhap) -- North Korea poses a serious and most imminent threat to the United States and its allies in the Indo-Pacific region such as South Korea, the commander of U.S. Indo-Pacific Command said Tuesday.

"North Korea poses a significant security risk to the United States and our partners in the Indo Pacific Region. The country has taken no meaningful steps toward denuclearization, despite promising signs of de-escalation in 2018, and it continues to advance its strategic weapons program," Davidson said in a statement submitted to the Senate Armed Services Committee prior to a Senate hearing.

"Until the nuclear situation is resolved on the Korean Peninsula, North Korea will remain our most immediate threat," he added. 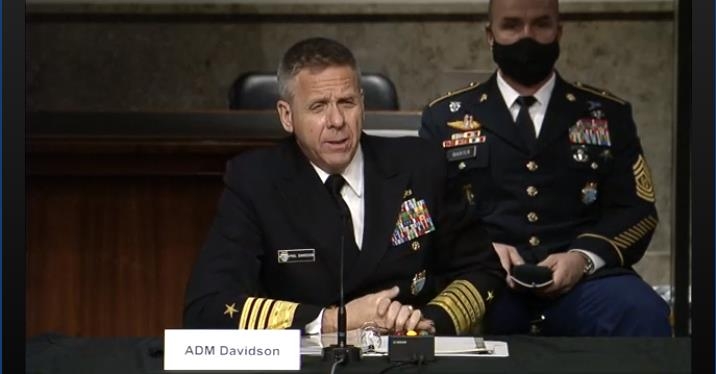 The four-star admiral said the North has continued to develop weapons of mass destruction despite its self-imposed moratorium on nuclear and long-range missile testing that has been in place since late 2017.

"Pyongyang maintains a diverse and growing missile inventory, and North Korea unveiled several new ballistic systems during military parades in late 2020 and early 2021, including two SLBMs and an ICBM," he wrote.

"In early 2021 he characterized the United States as the North's biggest or principal enemy as he vowed to strengthen its nuclear arsenal. Kim also identified several new weapon modernization goals in early 2021, to include developing tactical nuclear weapons and hypersonic glide vehicles and improving the readiness and accuracy of North Korea's ICBMs," he said.

"Pyongyang's missile research and development efforts, coupled with its ongoing pursuit of nuclear material and technology, are consistent with the regime's stated objective of being able to strike the U.S. homeland," he added.

Davidson said North Korea continues to evade U.N. Security Council sanctions via illegal ship-to-ship transfers of goods prohibited under the sanctions regime, such as oil, but also through various other means, including cyber theft.

Tuesday's hearing came as the committee is set to hold a confirmation hearing for Adm. John Aquilino, commander of the U.S. Pacific Fleet, who has been tapped to replace Davidson at the Hawaii-based command.