WASHINGTON, March 9 (Yonhap) -- South Korea shares many common interests with the United States in the Indo-Pacific, including the nuclear challenge from North Korea and preserving freedom of navigation, a State Department spokesman said Tuesday.

"We share any number of interests, including the challenge of North Korea that we've talked about, including a free and open Indo-Pacific. And we've underlined and underscored our commitment to the region," Ned Price told a daily press briefing when asked about South Korea's possible consideration to join the U.S.-led regional forum known as the Quad.

His remarks came as U.S. President Joe Biden is set to hold a summit with his Quad counterparts.

The White House earlier said Biden will be joined by prime ministers Scott Morrison of Australia, Narendra Modi of India and Yoshihide Suga of Japan on Friday for the first-ever Quad summit. 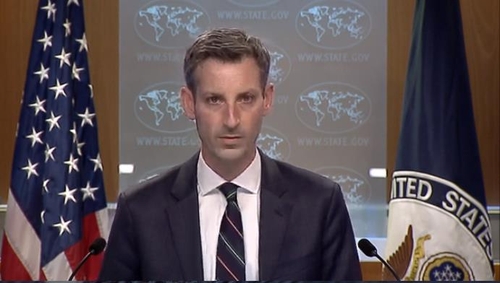 Seoul has been reluctant to join the regional forum, which the former Trump administration had promoted as its major tool to counter what it had called Chinese aggression.

"The Moon government is even pondering whether to join a potential Quad+ to show its commitment to the U.S.-ROK alliance and, indirectly, influence Biden's North Korea policy," Hwang Ji-whan wrote in an op-ed co-authored by Ramon Pacheco Pardo, associate professor in international relations at King's College in London, and published by U.S. daily The Hill.

Price said he will not make any projections about Seoul's participation in the Quad, but noted his country will continue to engage with South Korea multilaterally, as well as bilaterally.

Price also underscored the importance of cooperation between his country and South Korea and other U.S. allies to denuclearize North Korea, noting the U.S. is still undergoing a review of its North Korea policy.

"When it comes to North Korea broadly... we will adopt a new approach -- a(n) approach that fundamentally seeks to keep the American people and our allies safe ... in close coordination with our treaty allies ROK and Japan and other allies and partners on ongoing pressure options, and the future for potential diplomacy," he said.

The department official did not rule out the possibility of a summit between Biden and North Korean leader Kim Jong-un when asked, but said the new U.S. approach toward the North will be different from that of the former Trump administration.

"So I'm not going to announce or, on the other hand, rule out any sort of meetings or any specific diplomatic efforts. But I think those will be the principles that guide our approach to North Korea going forward," he added.

Donald Trump held three meetings with Kim, including two bilateral summits, before he stepped down as president on Jan. 20.

North Korea has stayed away from denuclearization negotiations since the second Trump-Kim summit ended without a deal in February 2019.