(ATTN: CHANGES dateline; UPDATES with reports of released statement from the U.S. Department of State in paras 9-12)

SEOUL/WASHINGTON, March 10 (Yonhap) -- U.S. Secretary of State Antony Blinken and Defense Secretary Lloyd Austin will visit Seoul next week for a "two-plus-two" meeting with their South Korean counterparts, the foreign and defense ministries here said Wednesday, as the two allies seek to coordinate on North Korea's denuclearization and other issues.

Blinken and Austin are set to arrive here on Wednesday after a trip to Japan as part of their first Asia swing since the Jan. 20 inauguration of the Joe Biden administration. A day later, they will attend the joint meeting with Foreign Minister Chung Eui-yong and Defense Minister Suh Wook. 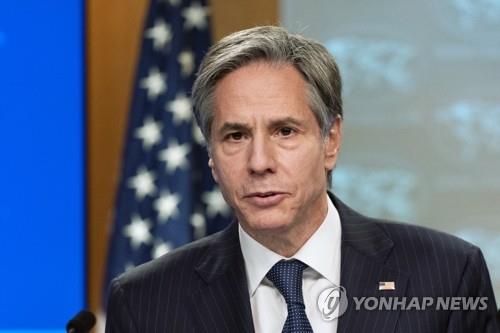 The two plus two meeting would mark the first such gathering since it was last held in Washington in October 2016. It was first instituted in 2010 to highlight the alliance against North Korean military threats.

The meeting will come amid a series of pending issues, including stalled nuclear diplomacy with Pyongyang and the slower-than-expected preparations for the transfer of wartime operational control (OPCON).

The agenda at the upcoming meeting may include creating fresh momentum to reengage with the North and advance the stalled denuclearization talks with it, making progress in the process of the OPCON handover and rejuvenating the alliance to tackle global issues, such as climate change and cyberthreats.

On the occasion of the visit by the top U.S. officials, Seoul and Washington could also sign an official deal on the sharing of the cost for stationing the 28,500-strong U.S. Forces Korea troops, in a show of their will to firm up the alliance.

South Korea and the U.S. agreed upon a new Special Measures Agreement (SMA), under which Seoul will raise its payment for stationing the 28,500-strong USFK troops by 13.9 percent this year from 2019. Under the multi-year deal until 2025, Seoul's payment will be linked to the increase rate of its defense spending.

Washington is also expected to use the top officials' visit here as an opportunity to cement trilateral cooperation with Seoul and Tokyo, and craft a united front against North Korea's nuclear threats and China's growing assertiveness.

The U.S. State Department later said the upcoming trip will highlight cooperation between the United States and its Asian allies.

"Secretary of State Antony J. Blinken will travel to Tokyo, Japan, and Seoul, Republic of Korea (ROK), March 15–18 to reaffirm the United States' commitment to strengthening our alliances and to highlight cooperation that promotes peace, security, and prosperity in the Indo-Pacific region and around the world," it said in a press release, using South Korea's official name.

It added the secretary of state will meet with his South Korean counterpart and other senior officials to discuss issues of bilateral and global importance.

"Secretary Blinken will also meet virtually with Korean youth leaders and host a virtual roundtable with emerging Korean journalists to discuss the importance of the U.S.-ROK Alliance in promoting peace, security, and prosperity in the Indo-Pacific region and across the globe," it said.

On Wednesday, Chung and Suh will also meet their counterparts separately.

"Minister Chung and Secretary Blinken will hold talks on Wednesday to exchange their views on South Korea-U.S. relations, the Korean Peninsula issues, and regional and global cooperation," the foreign ministry said in a press release.

The ministry also voiced hope that the visit to Seoul by Blinken and Austin will serve as an opportunity to strengthen communication and cooperation between the two countries and further strengthen their alliance.

Seoul's defense ministry said that during their two-way talks, Suh and Austin will exchange their assessments of the security situation on the Korean Peninsula and discuss an array of alliance issues.

A Cheong Wa Dae official said that arrangements are also being made for the top U.S. officials to pay a courtesy call on President Moon Jae-in during their stay in Seoul.

Austin plans to stay here until Friday, while Blinken will leave on Thursday. 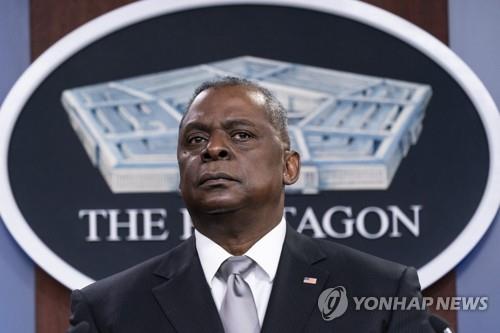