(ATTN: UPDATES with more info in 6-8 paras)
By Kim Han-joo

SEOUL, March 11 (Yonhap) -- South Korea on Thursday approved the use of AstraZeneca's COVID-19 vaccine for people aged 65 and older, seeking to boost the vaccine rollout as new overseas studies showed its effectiveness.

The inoculation campaign will now allow using AstraZeneca products on all adults, including health care workers and patients at long-term care facilities who are among the first in line, the KDCA said. 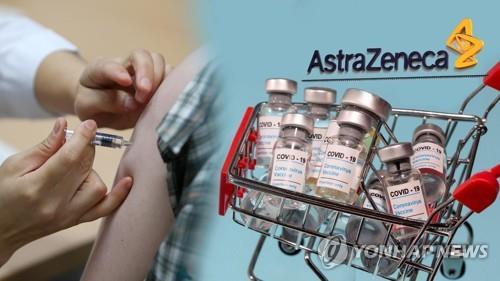 An independent panel under the health ministry earlier recommended that the AstraZeneca vaccine be approved for older people, following in the footsteps of several European countries that reversed decisions on the two-dose regimen.

The panel's decision to lift the age limit was based on data released in England and Scotland, revealing its effectiveness in preventing infection and lowering hospitalizations among elderly people.

British health authorities announced that vaccines are more than 70 percent effective in preventing infection from the COVID-19 virus in those over 80 after one dose of the shot.

Another study from Scotland showed that AstraZeneca vaccines showed a maximum 94 percent effectiveness rate in preventing infection among the elderly.

The authorities also said an inter-dose interval will be extended from the current eight to 12 weeks for AstraZeneca products, to 10 to 12 weeks.

The approval could speed up the country's inoculation campaign, which includes administering AstraZeneca products to 376,000 health care workers and patients aged 65 and older at sanatoriums, nursing facilities and rehabilitation facilities within this month.

The authorities also announced that a second batch of AstraZeneca's COVID-19 vaccines for around 3.5 million people will arrive in the country between late May and early June.

The second shipment of 7 million doses of vaccines is part of the deal for 10 million people, it said. The first batch for 785,000 people already arrived here last month and was administered.