WASHINGTON, March 10 (Yonhap) -- The United States will not ease any of its sanctions on Iran, including the release of Iranian funds blocked in South Korea, until Iran first complies with its obligations under its nuclear deal, U.S. Secretary of State Antony Blinken said Wednesday.

"As we've said, if Iran comes back into compliance, with its obligations under the nuclear agreement, we would do the same thing that would involve, if it came to that, if Iran made good on its obligations, sanctions relief pursuant to the agreement," the top U.S. diplomat told the House Foreign Relations Committee.

"But unless and until Iran comes back into compliance, they won't be getting that relief and the report you referred to is simply incorrect," he added when asked by a lawmaker. 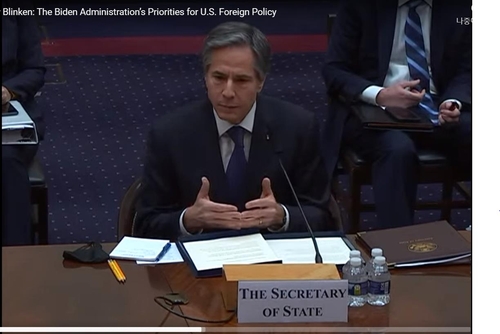 South Korea earlier said it may release about US$1 billion of Iranian money held in South Korean banks after first consulting with the United States and if the U.S. agrees to it.

Blinken flatly dismissed any plans to release Iranian funds, saying, "We are not," when asked why the funds were being released.

About $7 billion in Iranian funds are currently frozen in South Korean banks.

Seoul agreed to release part of the money to a Swiss bank account to be used for humanitarian purposes but only if the U.S. agreed to such an arrangement.

Such an agreement came after Tehran seized a South Korean tanker, along with crew members, in an apparent attempt to pressure South Korea to release its money, which mostly consists of South Korean payments made for oil purchased from Iran.

The Iranian money has been frozen since shortly after the U.S. quit the multilateral nuclear deal with Iran, known as the Joint Comprehensive Plan of Action, in May 2018.

Since coming into office in January, the Biden administration has been urging Iran to comply with its obligations under the nuclear deal, saying the U.S. too will return to the agreement following Iran's compliance.

Asked about the new administration's strategy toward North Korea, the state secretary said the U.S. is still undergoing a comprehensive review of its policy to make sure the country is using the best tools available.

"When it comes to North Korea, the policy itself and our approach is something we're also reviewing to make sure we have the best possible tools to advance denuclearization, and in particular to look at the different pressure points," he told the committee.

When asked if the new administration would agree on the need to formally end the Korean War, Blinken said the move would have to serve U.S. interests, as well as those of U.S. allies.

"We have to make sure that we are doing everything we can to advance the security of our allies and partners, starting with South Korea, as well as Japan, working toward denuclearization of the Korean Peninsula and, of course, making sure that our own security equities are taken into account," he said.

"So when it comes to anything of that nature, that significant, that dramatic, of course the first thing we would need to do is to make an assessment of our own judgment about whether that could advance all the things I just talked about, but of course, to be engaged in very close consultations with our partners, starting with the Republic of Korea," he added, referring to South Korea by its official name.

Blinken is set to visit South Korea, together with Secretary of Defense Lloyd Austin next week as part of their first overseas trip that will include a stop in Japan.

(2nd LD) Iranian funds in S. Korea will not be released until Iran returns to compliance: Blinken

(2nd LD) Iranian funds in S. Korea will not be released until Iran returns to compliance: Blinken