SEOUL, March 11 (Yonhap) -- A police officer was caught riding an electric scooter while drunk in the greater Seoul area due to a quarrel with a citizen and will likely be punished with a fine, investigators said Thursday.

The 41-year-old officer was accused of riding his electric scooter on a road in Bucheon on the western outskirts of Seoul at 11:49 p.m. Wednesday, and his DUI was disclosed after he quarreled with a motorcycle courier, according to police.

The bickering reportedly began after the courier honked his horn at the officer. The courier then called police after smelling alcohol from the officer. 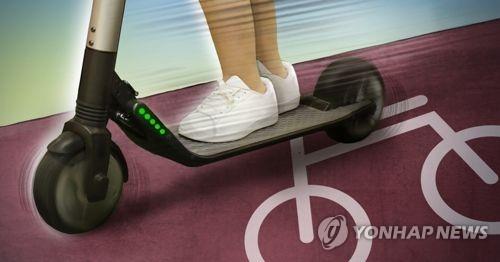 The officer refused to take a breathalyzer test on the scene and will likely be fined 100,000 won on DUI charges, police said, withholding his identity except to note that he is a corporal belonging to the Samsan Police Station in Incheon, west of Seoul.

According to the revised Road Traffic Act, which took effect on Dec. 10 last year, electric scooters with a maximum speed of less than 25 kph and a total weight of less than 30 kilograms are classified as personal mobility devices.

Drunk riders of personal mobility devices, including bicycles, are punished with a fine of 30,000 won, and the penalty rises to 100,000 won if they refuse sobriety tests.