SEOUL, March 12 (Yonhap) -- The U.S. Forces Korea (USFK) said Friday its commander's recent remark on a plan to build new missile defense capabilities on the Korean Peninsula does not involve the introduction of new equipment or units.

Gen. Robert Abrams said Wednesday that the United States will deploy two "specific" anti-ballistic missile capabilities in South Korea this year in addition to one that is already in place. His remarks raised speculation that the U.S. might be considering bringing in an additional Terminal High Altitude Area Defense (THAAD) system or other advanced anti-missile assets to the peninsula.

The colonel declined to elaborate on what the capabilities refer to, citing "operational security," but said they will ensure the USFK can "maintain a high 'Fight Tonight' readiness level and provide a robust combined defense posture to protect" South Korea from "any threat or adversary."

Seoul's defense ministry also said the two countries did not have discussions on deploying additional anti-missile assets on the peninsula.

"The USFK commander's remarks appear to be an explanation on the process of continuously supplementing and developing its missile defense system to better respond to North Korea's evolving threats," the ministry said in a statement.

Abrams' remark was made at a U.S. House Armed Services Committee hearing when asked to comment on his assessment on missile defense priorities amid threats from North Korea.

Referring to the U.S. Missile Defense Agency (MDA)'s push to build "three specific capabilities," the commander said, "One is already here. The other two will come on board this year that will significantly enhance our ballistic missile defense."

Experts say the system already in place could be related to the U.S.' THAAD system that was installed in South Korea's central town of Seongju in 2017.

The U.S. has sought to upgrade its THAAD batteries around the world, including the one in South Korea, to add an advanced radar and integrate the system with Patriot missiles.

Its deployment has been one of the most sensitive issues for South Korea, as China has taken economic retaliatory measures over Seoul's hosting of the battery. Seoul and Washington have stressed that the system aims only to better cope with the growing missile threats posed by North Korea. 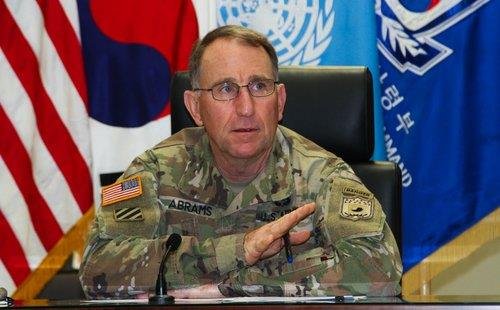