SEOUL, March 12 (Yonhap) -- South Korea's Christian community has expressed concerns about political instability in Myanmar in connection with the recent coup and vowed for solidarity with the pro-democracy movement there.

"The Catholic Church in Korea expresses her deepest concern about the outbreak of violence and the subsequent bloodshed in our neighboring country, Myanmar," the Catholic Bishops' Conference of Korea said in a statement released Thursday.

It said South Korea has gone through similar military oppression in the past and sympathizes with the people in Myanmar who have staged persistent public resistance since the military takeover on Feb. 1.

"The Catholic Church in Korea expresses fraternal solidarity with brothers and sisters of Myanmar who are walking in the path of the Cross, as sharing indescribable lament and pain," it added. 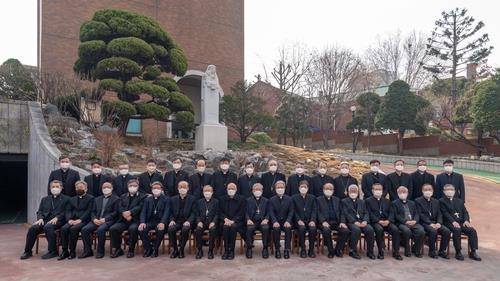 Cardinal Andrew Yeom Soo-jung, the Catholic archbishop of Seoul, sent a letter to his Myanmar counterpart, Cardinal Charles Maung Bo, on Friday, pledging to join hands with Myanmar people, with a contribution of US$50,000.

"I've deeply lamented over the news on the Myanmar military's suppression and violence against peaceful demonstrators," he said. "I express solidarity with the Myanmar people who long for democracy and hope that they will reclaim democracy as soon as possible."

At the same time, the National Council of Churches in Korea (NCCK), an organization of South Korea's Protestant churches, also voiced its support for the civil uprising in the Southeast Asian nation.

"We declare that we will pray for the restoration of democracy, freedom and human rights in Myanmar in alliance with Korean churches and religious circles and civil societies in the world," the NCCK said in a statement Thursday.

It suggested the Korean Christians and churches offer a special one-minute prayer for peace and democracy in Myanmar every day during Lent, which ends in the first week of April.

The NCCK asked the United Nations to take action against the Myanmarese military regime, including an arms embargo and a travel ban. 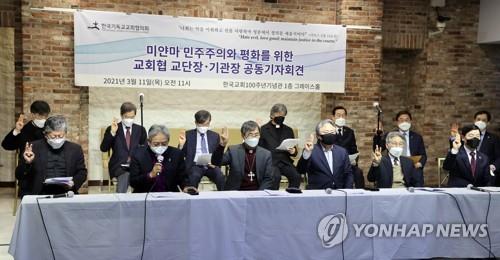 On Feb. 1, Myanmar's military authorities detained leaders of Aung San Suu Kyi's National League for Democracy party, including the state counselor herself, doubling down on their claims of fraud in the November elections, in which her party won a landslide victory.

A state of emergency has also been declared, while internet and flights have been cut off, throwing the country back into full military rule.