SEOUL, March 15 (Yonhap) -- South Korea's economy is estimated to have ranked 10th in the world in 2020 despite the coronavirus pandemic, data showed Monday.

The nominal GDP of Asia's fourth-largest economy was estimated at US$1.62 trillion last year, according to the data by the Organization for Economic Cooperation (OECD).

The estimated 2020 GDP ranking is up two notches from a year earlier. South Korea's economy also placed 10th in the world in 2018.

South Korea's nominal GDP is even slightly more than that of Canada, and Seoul could rank 9th in the world in light of its actual economic performance. 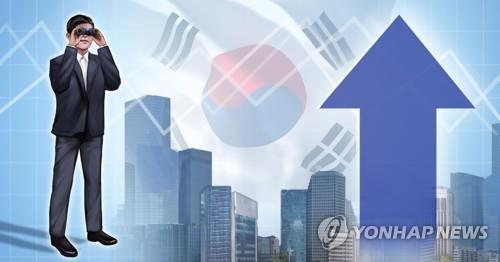 The estimated ranking is based on the OECD's growth forecasts, the foreign exchange rate and the GDP deflator, a gauge of inflation.

South Korea's rise in the global GDP ranking came as the country's economy fared better than other major nations last year despite the coronavirus outbreak.

The local economy contracted 1 percent in 2020 from a year earlier, the third-best among the group of 20 major economies after China and Turkey.

The Paris-based club of major economies attributed South Korea's solid economic performance to its effective anti-coronavirus measures and measures to minimize the coronavirus impact on its economy.

Meanwhile, the U.S. economy, the world's largest, shrank 3.5 percent in 2020 from the previous year, with Japan and Germany posting negative growth rates of 4.8 percent and 5.3 percent, respectively.

The coronavirus outbreak, which started in China in December 2019, has pounded economies across the world by sending consumption and trade tumbling. The coronavirus has so far infected nearly 120 million people globally, with the death toll reaching 2.65 million.
(END)