SEOUL, March 15 (Yonhap) -- South Korea's daily new coronavirus cases fell back to below 400 for the first time in a week on Monday as the number of people taking virus tests decreased over the weekend, but health authorities warned that the virus curve is set to follow an upward cycle amid warm weather and an increase in nontraceable cases.

The figure was sharply down from 459 on Sunday. The daily new cases stood above 400 over the past week due to sporadic cluster infections and an increase in people traveling amid warmer weather. 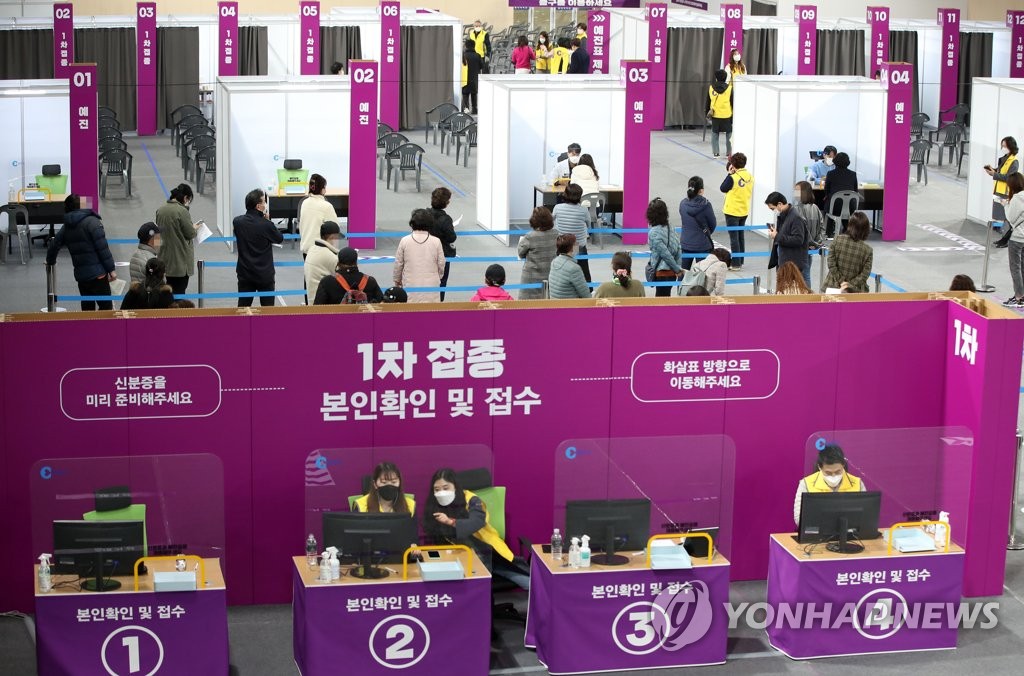 Amid no clear signs of letup, the country extended current social distancing measures for another two weeks until March 28.

Since mid-February, the greater Seoul area has been under Level 2, the third highest in a five-tier system, with other areas under Level 1.5.

Authorities eased some restrictions on restaurants and other public facilities in the Seoul metropolitan area, allowing them to operate for one more hour until 10 p.m. But they retained a ban on gatherings of five or more people.

But health authorities plan to announce new enhanced antivirus measures in the greater Seoul area on Tuesday amid signs of a resurgence in virus infections.

Later in the day, health authorities and local governments said 307 new cases were confirmed as of 9 p.m. Monday, down 49 from the number recorded at the same time the previous day. Daily tallies are counted through midnight and announced the next morning.

Since the start of the country's vaccination campaign on Feb. 26, a total of 588,958 people, including 1,074 the previous day, have been inoculated.

The country aims to create herd immunity by November.

A total of 8,347 cases of side effects after vaccinations have been reported so far, although 8,248 of them were mild symptoms.

Two more suspected cases of anaphylactoid reaction, which has similar symptoms to anaphylaxis, a serious allergic reaction after immunization, have been reported, raising the total of such cases to 76.

A total of 16 deaths after vaccination have been reported so far, according to the KCDC.

Health authorities tentatively concluded that there were no casual relations between the vaccinations and the 14 deaths. 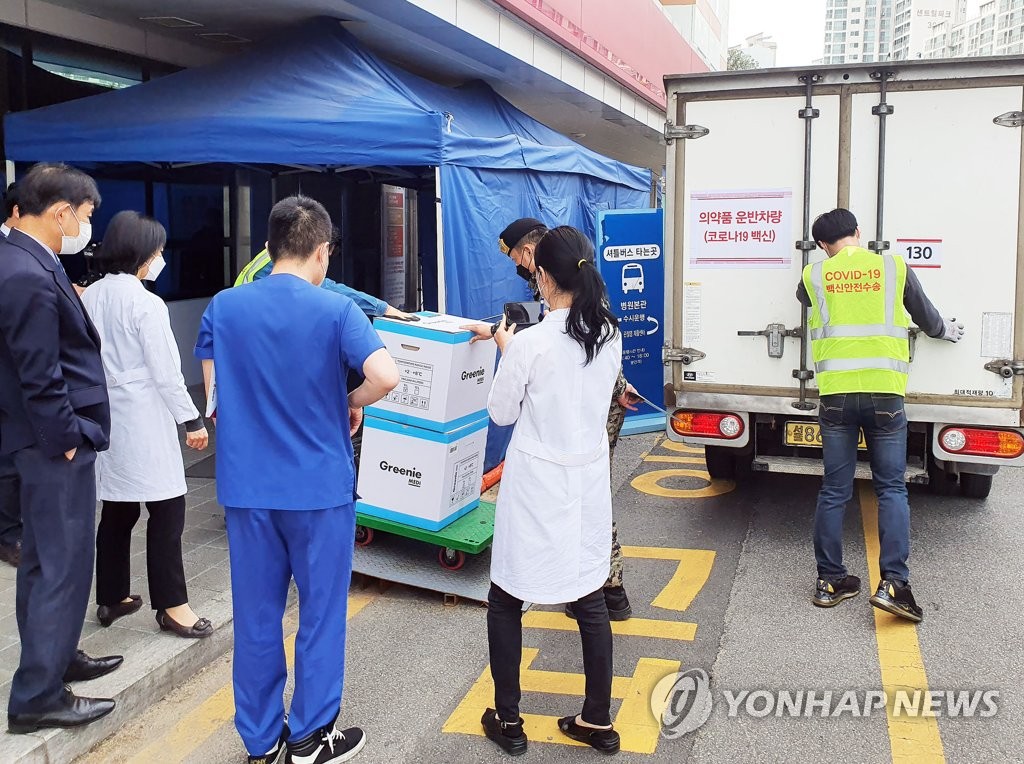 Health authorities announced a detailed vaccination plan for the second quarter of this year.

Under the plan, a total of 12 million people, including those aged 75 and older and other virus-vulnerable groups, will be vaccinated during the first half of the year.

About 370,000 people aged 65 and older who are hospitalized or work at medical treatment facilities will be inoculated as soon as early next week. Their vaccinations were delayed due to controversy over the efficacy of AstraZeneca's vaccine for the age group.

A total of 254 vaccination centers will be established across the country by July to get seniors aged 75 and older vaccinated with Pfizer's vaccine starting from the first week of April.

Seniors aged between 65 and 74 will be vaccinated in June with AstraZeneca's vaccine.

Teachers at nurseries, kindergartens and lower grade elementary schools will be inoculated with AstraZeneca's vaccine in April.

As part of efforts to keep coronavirus variants from entering the country, health authorities will vaccinate flight attendants in May.

Digitalized vaccination certificates will be issued to people who get vaccinated.

Health authorities said a total of 17.79 million doses of vaccines will be brought into the country in the first half of the year, of which 16.10 million doses will be provided from March to June. 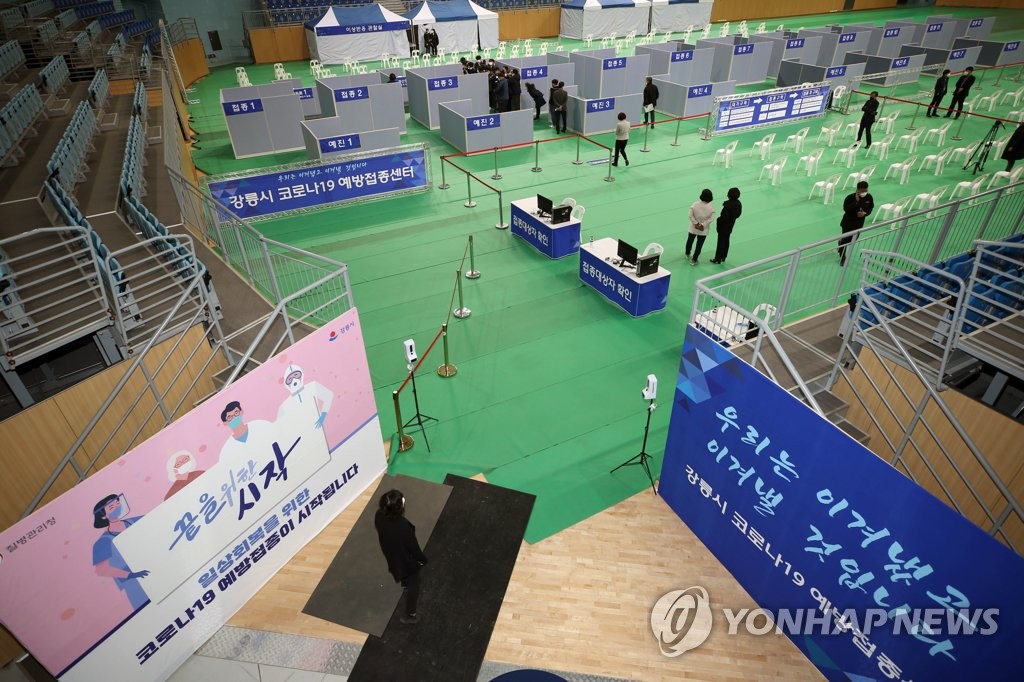 Of the 370 locally transmitted cases, 112 came from Seoul and 161 were reported from Gyeonggi Province that surrounds the capital. Incheon, 40 km west of Seoul, reported 18 more cases. The three areas account for around half of the nation's population.

The number of imported cases came to 12, down from 23 the previous day. They included four from the United States and two from Pakistan.

The country added six more deaths, raising the total to 1,675. The number of patients with serious symptoms across the country reached 99, down from the previous day.

The total number of people released from quarantine after making full recoveries moved up 346 to 87,754.