SEOUL, March 15 (Yonhap) -- South Korea on Monday expressed hope for North Korea to take part in an inter-Korean World Cup qualifier scheduled for June as it is preparing to host the soccer match amid the global coronavirus pandemic.

The second round of the 2022 Qatar World Cup qualifying tournament began in September 2019 and was supposed to resume in March 2020, but the schedule has been postponed multiple times due to the coronavirus pandemic.

The two Koreas belong to the same Group H, and they played to a scoreless draw in a match in Pyongyang in October 2019. Seoul is now to host another inter-Korean match.

"The government is to prepare for an inter-Korean match and others in accordance with FIFA and international rules," Lee Jong-joo, the unification ministry's spokesperson, told a regular press briefing. "We hope that North Korea will also take part in the qualifiers just as other countries participating in such matches."

It remains unclear whether North Korea will join the upcoming World Cup qualifiers as it has maintained tight border controls and strictly restricted the movement of people amid the global pandemic despite its claims to be coronavirus-free.

Inter-Korean relations remain stalled since a summit in Hanoi between the United States and North Korea broke down in early 2019 without a deal on the North's denuclearization. North Korea has not responded to Seoul's repeated calls for cross-border exchanges and cooperation. 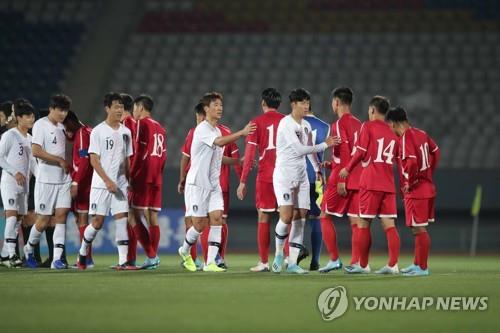