SEOUL, March 15 (Yonhap) -- Local air quality may further worsen later this week, as high levels of yellow dust originating from the inland deserts in northern China are forecast to blow into the Korean Peninsula, which has been hit by heavy concentrations of ultrafine dust particles for nearly a week, the state weather agency said Monday.

According to the Korea Meteorological Administration (KMA), yellow dust originating from the extensive inland areas of China and Mongolia and the Gobi Desert is expected to arrive over South Korea beginning early Tuesday morning. 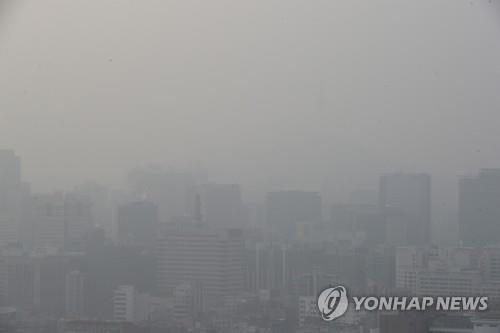 Yellow dust storms from some parts of the Chinese and Mongolian areas will be extraordinarily strong, the KMA said.

Moreover, very strong winds reaching 50 to 70 kph generated by a combination of the high pressure developed near Lake Baikal and the low pressure developed in northeastern China have caused widespread yellow dust storms, it noted.

As the low pressure in the northeastern region of China moves toward the east, additional yellow dust can be generated from the back of the low pressure, the agency said, forecasting it is highly likely to blow into Korea via the northerly wind on Tuesday morning.

The density and direction of the yellow dust can change depending on its volume and the air current, it added.

Meanwhile, Seoul and almost all parts of the central region and some areas in the southern region will continue to be affected by heavy concentrations of ultrafine particles throughout Monday, the KMA said.

The latest onset of ultrafine dust concentrations caused by the combination of stagnant local air and an influx of air pollutants from abroad will begin to taper off Tuesday afternoon, the agency said.