SEOUL, March 15 (Yonhap) -- The defense chiefs of South Korea and the United States will hold their first face-to-face meeting in Seoul this week, and the two sides are working to fix their agendas, the defense ministry said Monday.

U.S. Secretary of Defense Lloyd Austin is set to arrive in South Korea on Wednesday for a three-day stay and will hold talks with Defense Minister Suh Wook, according to the ministry.

The two ministers will then join Foreign Minister Chung Eui-yong and U.S. Secretary of State Antony Blinken on Thursday for a "two plus two" meeting.

It is Austin's first Asia swing, which also includes trips to Hawaii, Japan and India, since taking office in January as the first Pentagon chief of the Joe Biden administration. 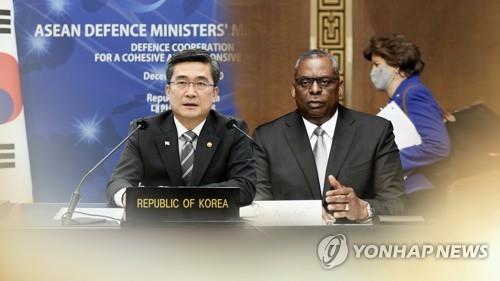 "The two sides are discussing detailed items for the meeting," ministry spokesperson Boo Seung-chan told a regular briefing. "(His schedule) is expected to be minimized due to COVID-19 and other situations. He does not have a plan to observe the Korea-U.S. combined exercise as far as I know."

Seoul and Washington are now conducting their regular springtime combined exercise, which began March 8 and will continue until Thursday.

How to further boost their joint military posture against evolving nuclear and missile threats by North Korea is expected to be on the table, along with their push for the envisioned transition of the wartime operational control (OPCON) of South Korean troops from Washington to Seoul.

During the visit, the Pentagon chief could also urge Seoul to have better defense ties with Japan, and to be more proactive in joining the U.S.' efforts to keep China in check.

"Tomorrow, I kick off a week of meetings with my INDOPACOM leadership, as well as my counterparts in Japan, the Republic of Korea and India. We have many important issues to discuss to ensure peace and stability in the Indo-Pacific region," Austin tweeted Sunday.

In a separate posting, he said: "We wanted to share thoughts on why this trip- and diplomacy- are so important. Of note, I view China as our pacing threat, and it's critical we work with our Indo-Pacific partners to address the China challenge."

Some media have raised speculation that North Korea could undertake provocations around the time the two top U.S. officials visit the South. But the defense ministry said that North Korea has not shown any unusual movements up until now.

It also added that the South is closely monitoring the North's nuclear activities. 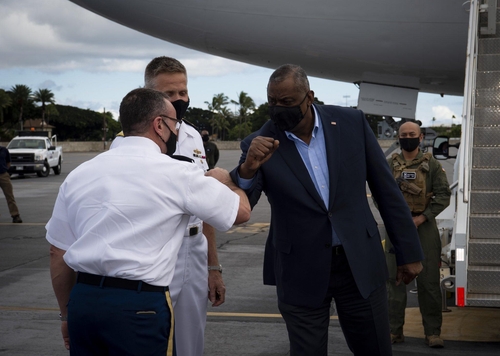