JEJU, South Korea, March 15 (Yonhap) -- More than 330 former prison inmates are to attend their sentencing hearings in a single day this week in retrials of their cases linked to a bloody suppression of a civilian uprising on Jeju Island in 1948, court officials said Monday.

The Jeju District Court is to hold its sentencing hearings Tuesday for 335 former inmates convicted of violating the defense security law during the Jeju April 3 Incident, the officials said. 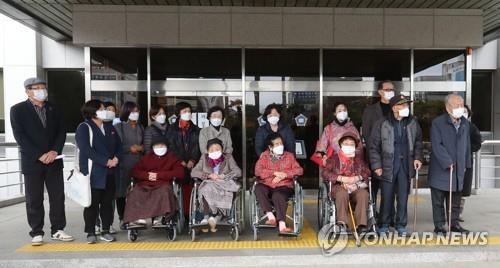 On April 3, 1948, Jeju islanders began an uprising against U.S. military-led rule following Korea's liberation from the 1910-1945 colonial rule of Japan. The Korean government at the time distorted the uprising as a communist riot and massacred an estimated up to 30,000 civilians on the island in armed crackdowns.

On Feb. 26 this year, the National Assembly passed an amendment bill on the Jeju April 3 Special Act paving the way for fresh investigations into the incident and compensation of its victims.

The court officials said it remains to be seen whether the former inmates linked to the April 3 incident will simultaneously have their honor restored through the retrials.

The retrials divided into 20 cases will proceed from 9 a.m. to 6 p.m., they said, noting it will become the nation's largest-ever trial involving the largest number of defendants in a single case.

The Jeju court has pushed for their simultaneous retrials of 335 people, considering most of the former inmates are aged or have died.

In case the inmates remain missing or have died, their bereaved families will attend the sentencing hearings, the officials said.

"Each hearing will last about 20 minutes, but the defendants will be guaranteed maximum opportunities for statements," a court official said.