SEOUL, March 15 (Yonhap) -- President Moon Jae-in made clear Monday that he will place a top priority on eradicating "deep-rooted evils" related to real estate during the remainder of his tenure.

He acknowledged that his liberal administration has so far focused on other measures, aimed at stabilizing the overheated housing market, including stopgap ones to address pending problems.

"On the basis of that self-reflection, the government will push strongly for clearing up deep-rooted evils, associated with real estate, as a core policy task in the remaining term," he said during a weekly meeting with senior Cheong Wa Dae aides.

Moon pledged to establish a fair and transparent real estate transaction order as well. His single five-year tenure ends in May next year.

He even described the tasks as a way to deliver the "candlelight spirit" that displaced the Park Geun-hye government from power and led to the birth of his administration. 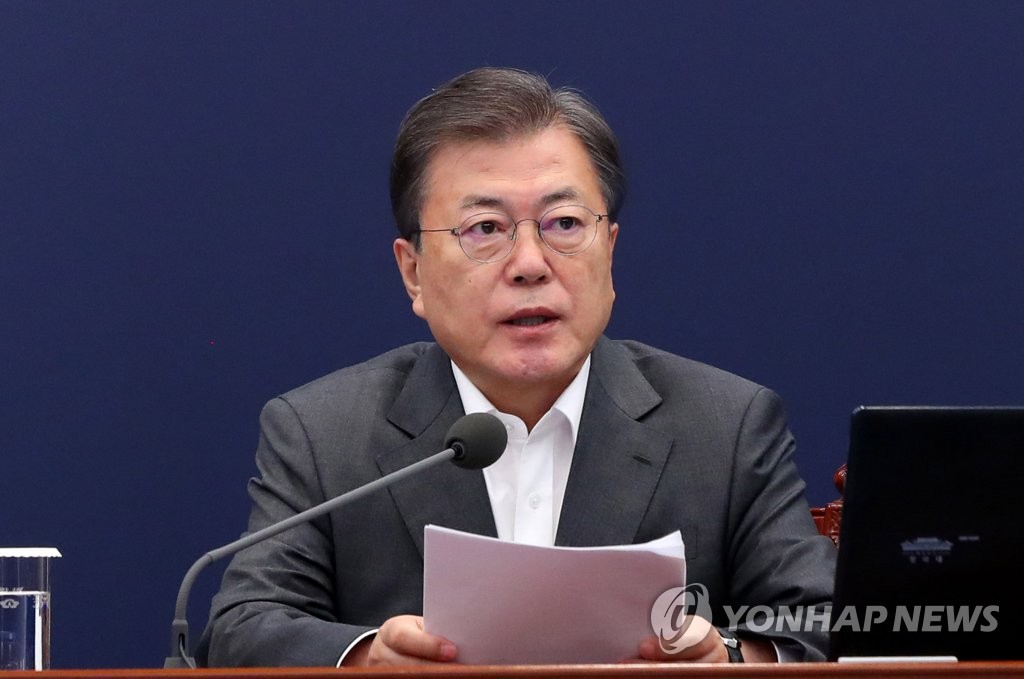 Moon's remarks represented the latest in a series of his strongly worded messages on the issue since the revelation early this month of alleged massive speculative land purchases by officials at the Korea Land and Housing Corp. (LH), the state housing supply arm, over a few years.

It has emerged as arguably the hottest political issue ahead of the April 7 mayoral by-elections in South Korea's two largest cities -- Seoul and Busan.

Moon, however, called for a halt to partisan strife over the matter, saying it is a bipartisan one linked with the campaign for a more transparent and impartial society.

He urged joint efforts to devise ways to bring a fundamental change to the current system, such as creating a new body tasked with overseeing illegal property transactions.

"The responsibility rests primarily on the government, but it's also a problem that our politics has long failed to resolve," he said.

The president then reiterated the importance of maintaining the drive to expand the housing supply under the initiative of the public sector.

He was referring to a package of measures, announced on Feb. 4, to provide a total of 830,000 additional homes, mostly apartments, nationwide over the coming years.

The policy "shouldn't be swayed under any circumstance," he said.

"Cleaning up deep-rooted evils and stabilizing the real estate market are two sides of the same coin," he added. "The government will do its best to ensure that supply measures will be carried out without a setback."

Doubts have grown about the future of the nascent drive to sharply increase housing supply around Seoul and in other major cities, especially since its architect, Land Minister Byeon Chang-heum, has offered to resign to take responsibility for the LH scandal. He served as president of the LH just before assuming the ministerial post last December.

Moon accepted his resignation offer but will let him finish rudimentary work needed for legislation on the Feb. 4 measures before stepping down. The minister is expected to quit the job no later than the by-elections next month.

Another dilemma is that the LH is supposed to play a pivotal role in implementing the policy but has lost public trust due to the scandal, with an extensive police-led probe under way.