JEJU, South Korea, March 15 (Yonhap) -- Political and civic conflict over the proposed construction of a new international airport on Jeju Island appears to be intensifying, with supporters and opponents of the project holding a string of separate rallies in the city of Jeju in recent weeks.

Justice Party lawmaker Sim Sang-jeung, flanked by a group of Jeju residents opposed to the new airport construction, held a news conference in front of the Jeju provincial government building on Monday, calling for the cancellation of the airport project.

"Discussions over the construction of the second international airport have continued over the past decade, but the conflict has rather escalated," Sim said, praising the provincial government for its decision to reflect the will of Jeju residents as a solution to the conflict.

"Gov. Won Hee-ryong is supposed to respect and realize the will of Jeju residents more than anyone else but has rather incited conflict by going against the public will," the lawmaker said, urging the transport ministry to scrap the airport project immediately.

The transport ministry first announced the selection of a 5 million-square-meter lot in Seongsan, on the resort island's eastern side, as the site for the airport in November 2015, saying the existing Jeju International Airport has reached saturation.

In a separate Gallup Korea survey of 504 Seongsan residents, however, 64.9 percent supported the new airport. Supporters and opponents of the new airport construction have frequently held outdoor rallies in Jeju in recent weeks.

Amid the escalating dispute, Won, citing the poll of Seongsan residents, declared his determination Friday to push ahead with the airport construction, triggering fierce arguments on the pros and cons among provincial councilors. 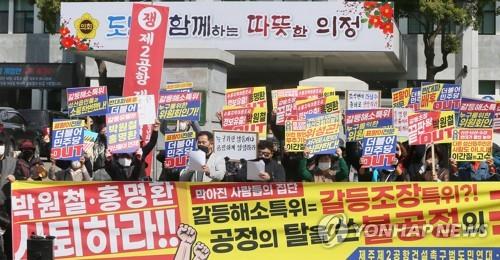 While the rally by Sim and her supporters was under way, two civic groups of Jeju organized separate rallies in favor of the airport construction.

The supporters' groups said Sim only opposes the new airport project without knowing the actual situation of Jeju.

"Will she be responsible for an accident at the overcrowded Jeju airport? The construction of the second (international) airport is intended to save lives," the groups said.