SEOUL, March 15 (Yonhap) -- South Korea and the United States plan to initial a recently concluded deal on the sharing of the cost for stationing U.S. troops here shortly after a "two plus two" meeting of their foreign and defense ministers in Seoul later this week, sources said Monday.

"We have been thinking about and consulting over this in a way that attaches the importance of the South Korea-U.S. alliance to the deal, and as a result, we have decided to initial it after the two plus two meeting," a source said on condition of anonymity.

Seoul's top negotiator, Jeong Eun-bo, and a U.S. State Department official are expected to do the preliminary signing, the source said, as Jeong's counterpart, Donna Welton, is unlikely to come here this week.

Before it takes effect, the cost-sharing deal, called the Special Measures Agreement (SMA), needs to go through a set of domestic procedures here, including presidential endorsement and parliamentary approval -- a process expected to take two months or so. 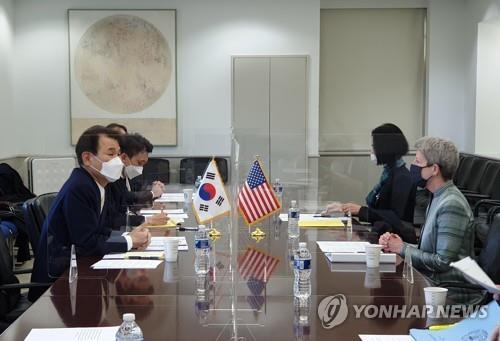