SEOUL, March 16 (Yonhap) -- The powerful sister of North Korean leader Kim Jong-un threatened Tuesday to scrap a military peace agreement with South Korea and break up a Workers' Party organ tasked with inter-Korean dialogue as she lambasted the South for conducting military exercises with the United States.

Kim Yo-jong also warned the new U.S. administration of President Joe Biden not to engage in such hostile acts, saying it better not do things that would "keep it from getting a good night's sleep" if it wants to sleep well for the next four years.

It marked North Korea's first message toward the Biden government since its January inauguration. The statement also came ahead of planned trips to South Korea by U.S. Secretary of State Antony Blinken and Defense Secretary Lloyd Austin this week. 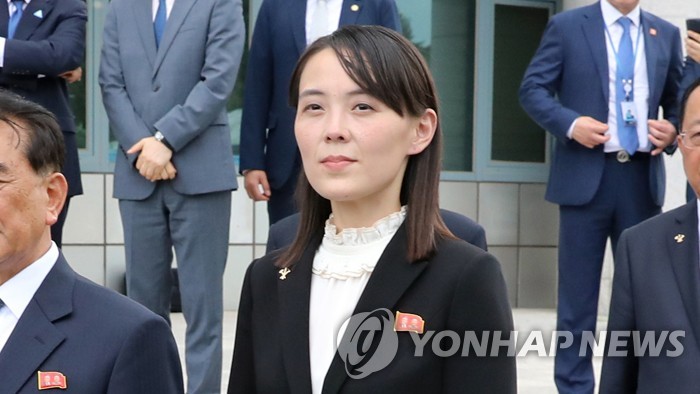 "South Korea has again chosen 'March of war' and 'March of crisis' instead of 'warm March' in front of all Korean people," Kim said in a statement carried by the Rodong Sinmun newspaper. "Whatever the South will do by following its master, it will be not easy that the warm spring days of three years that it strongly wants will return."

"We will keep an eye on the attitude and behavior of South Korea going forward and should it become more provocative, we could take special measures such as boldly scrap the inter-Korean military agreement," she added, referring to the deal signed in September 2018 to ease cross-border tensions.

Kim said that North Korea has no choice but to disband the Committee for the Peaceful Reunification of the Country handling cross-border affairs and dialogue, saying there is no reason for such an organization to exist anymore.

The statement also came after the White House said it has reached out to North Korea for talks, but the North has remained unresponsive.

South Korea and the U.S. kicked off their springtime combined military drills early last week involving a "minimum level of troops" given the coronavirus situation. The drills will last until Thursday.

The North has long demanded an end to joint military drills between the allies, denouncing them as a rehearsal for invasion.

At a rare party congress in January, the North called for an end to such exercises, calling it a fundamental issue that needs to be addressed before improving inter-Korean relations. It has also urged the U.S. to give up any hostile policy toward the North.

Inter-Korean relations remain stalled since a summit between the U.S. and North Korea in early 2019 broke down without a deal on the North's denuclearization.

Cross-border ties got chilled further after the North blew up a liaison office in its border town of Kaesong last June in anger over anti-Pyongyang leaflets sent from the South.