The Korea Meteorological Administration (KMA) said all of South Korea is to come under the influence of extraordinarily high levels of yellow dust that originated from the Inner Mongolian region in northern China and the vicinity of the Gobi Desert over the weekend and was moving south by riding the northerly wind. 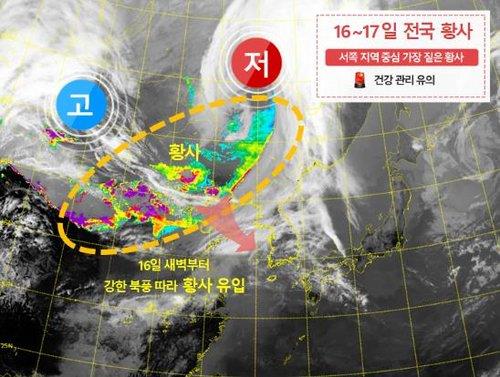 The upcoming yellow dust storm is forecast to begin to weaken Wednesday but may continue to affect the nation depending on the flow of atmospheric pressure on the Korean Peninsula, the KMA said.

On Monday, Beijing and other Chinese cities were shrouded by what the local weather agencies call the biggest sandstorm in a decade due to the same heavy winds blowing in from the Gobi Desert and nearby regions.

The KMA said the incoming yellow dust already has begun to affect the nation's western regions, including Yellow Sea islands close to China, in the morning before spreading nationwide later in the day.

The average hourly concentration of fine dust particles smaller than 10 micrometers in diameter, known as PM 10, already rose to 145 micrograms per cubic meter on Baengnyeong Island in the Yellow Sea and 125 micrograms in Sokcho on the east coast as of 5 a.m.

The weather authorities here categorize concentrations of PM 10 between zero and 30 micrograms as "good," between 31 and 80 as "normal," between 81 and 150 as "bad" and more than 151 as "very bad." A fine dust advisory is issued when the PM 10 figure stays above 150 micrograms for longer than two hours.

The Ministry of Environment has already issued a preliminary yellow dust advisory for Seoul and almost all regions, except the southeastern provinces of Gyeongsang and Gangwon Province, east of the capital, warning that the PM 10 reading is expected to soar above 150 micrograms in the affected regions.

As fine dust particles can cause various ailments and undermine the body's immune system, government officials ask that citizens with respiratory or cardiovascular problems, children and other vulnerable people refrain from going outdoors.