WASHINGTON, March 16 (Yonhap) -- North Korea has achieved alarming success in its pursuit of nuclear and long-range missile capabilities and continues to expand its arsenal, which includes three ballistic missiles that can reach the U.S. homeland, a U.S. commander said Tuesday.

"The Kim Jong-un regime has achieved alarming success in its quest to demonstrate the capability to threaten the U.S. homeland with nuclear-armed ICBMs, believing such weapons are necessary to deter U.S. military action and ensure his regime's survival," the four-star Air Force general said in a statement submitted to the Senate Armed Services Committee prior to a hearing later in the day. 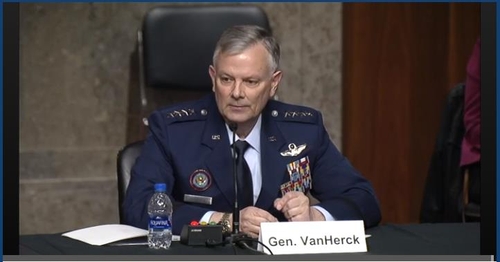 "In 2017, North Korea successfully tested a thermonuclear device -- increasing the destructive potential of their strategic weapons by an order of magnitude -- as well as three ICBMs capable of ranging the United States," he added.

North Korea staged its sixth and last nuclear test in late 2017 when it said it successfully detonated a hydrogen bomb.

North Korea has since maintained a self-imposed moratorium on nuclear and long-range missile testing.

VanHerck noted the North has already declared that it is no longer bound by such restrictions.

"The North Korean regime has also indicated that it is no longer bound by the unilateral nuclear and ICBM testing moratorium announced in 2018, suggesting that Kim Jong-un may begin flight testing an improved ICBM design in the near future," he wrote.

VanHerck reiterated the recently showcased ICBM now put to three the number of North Korean long-range missiles that can reach the U.S. mainland.

"So in the parade, the public parade we saw on the 10th of October, we saw additional capabilities and an additional missile. Now they are up to three missiles, missiles that we assess could strike our homeland," he later said in a press briefing at the Pentagon.

"Despite U.S. efforts in 2020 to reach an agreement with Kim Jong-un, North Korea continued its development of ICBMs capable of striking targets in the United States," he said in his submitted statement.

"As North Korea continues its pursuit of advanced long-range strategic weapons including the new systems displayed during their 10 October 2020 parade, USNORTHCOM remains committed to maximizing the capability and capacity of our ballistic missile defense systems."

The NORTHCOM commander said the U.S. stands ready and capable to detect and counter any threat from North Korea.

"We always maintain the ability to defend our homeland, and obviously the right to defend the homeland. We're postured each and every day through ground based interceptors which create deterrence by denial," he told the press briefing.