SEOUL, March 17 (Yonhap) -- U.S. Secretary of Defense Lloyd Austin said Wednesday the alliance with South Korea has "never been more important" given "unprecedented challenges" from North Korea and China, as he reaffirmed Washington's security commitment to the South.

Austin made the remark at the start of his first in-person talks with South Korean Defense Minister Suh Wook in Seoul, calling their alliance a "linchpin" for peace, security and prosperity for Northeast Asia, and their military readiness a "top priority."

"Given the unprecedented challenges posed by both the Democratic People's Republic of Korea and China, the U.S.-ROK alliance has never been more important," Austin said, referring to South and North Korea by their official names.

The remarks came a day after Kim Yo-jong, the powerful sister of North Korean leader Kim Jong-un, slammed an ongoing combined exercise between Seoul and Washington, warning the U.S. not to "cause a stink" if it wants to sleep in peace for the next four years.

"I am here today to reaffirm the United States' commitment to the defense of the Republic of Korea," Austin said. "You and I can both agree that military readiness is a top priority, and that our combined readiness must ensure that we are ready to fight tonight, if needed."

The North has been trying to bolster its nuclear and missile capabilities with the aim of developing a nuclear-tipped intercontinental ballistic missile capable of striking the mainland U.S. The country has recently shown signs of operations at some of its nuclear facilities.

In a joint contribution to The Washington Post on Monday, Austin and Secretary of State Antony Blinken said they, along with South Korea and Japan, will "strategize together on how to confront shared threats such as North Korea's nuclear weapons and ballistic missile programs."

Austin arrived at Osan Air Base in Pyeongtaek, south of Seoul, from Japan earlier in the day for a three-day stay as part of his first Asia swing since taking office in January. He is the first Cabinet-level U.S. official of the Biden administration to visit the country.

Referring to a recently concluded deal on the sharing of the cost for stationing U.S. troops here, Austin said it reflects U.S. President Joe Biden's "commitment to reinvigorating and modernizing" its alliances around the world.

"Our commitment to the US-ROK alliance, which has been steadfast for 70 years, remains ironclad," he said.

Calling the alliance the "linchpin" of peace and stability on the peninsula and beyond, Suh said that the bilateral ties have developed "in a reciprocal manner from the start of the Biden administration."

"Over the course of the development of the alliance, it is of utmost importance to maintain our combined defense posture and the formidable deterrence against North Korea. Going forward, we will continue to further strengthen our bond as a military alliance," Suh said.

On Thursday, Suh and Austin will join Blinken and South Korean Foreign Minister Chung Eui-yong for a "two plus two" meeting, which also serves as a venue to coordinate their policy measures toward North Korea and to discuss ways to further boost the alliance.

They will then initial the defense cost sharing deal and have a joint press conference, according to officials.

After paying a courtesy call on President Moon Jae-in, Suh and Austin plan to visit a state cemetery in Seoul to pay tribute to fallen heroes.

On Friday, Austin plans to meet with American service members stationed in South Korea before leaving for India, they said. 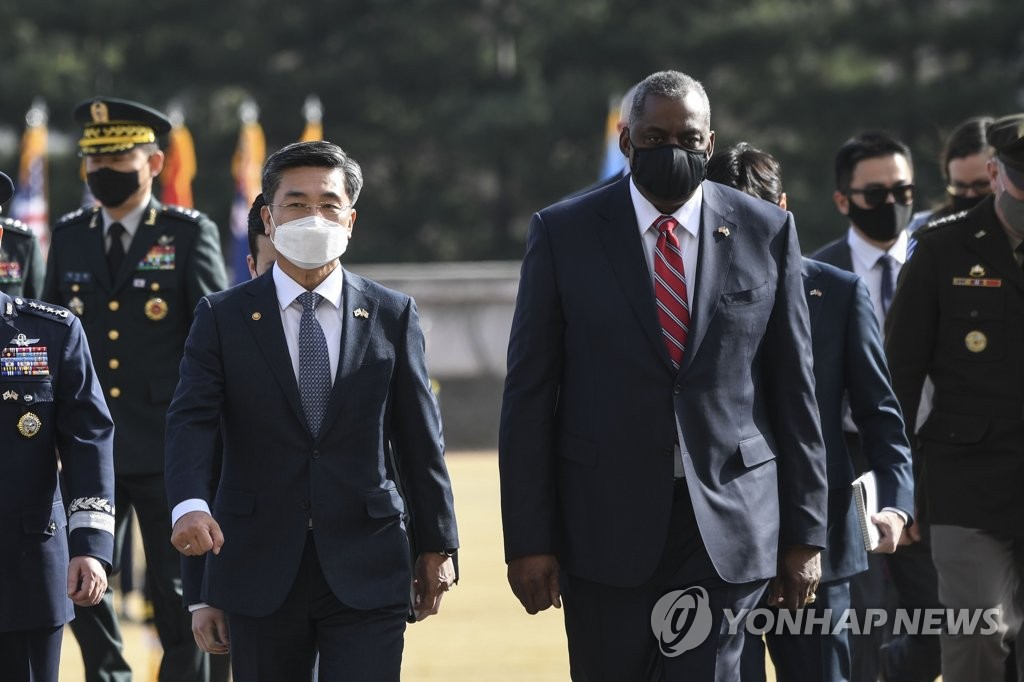