Blinken made the remarks during a press conference after the "two plus two" talks in Seoul that involved Defense Secretary Lloyd Austin, Seoul's Foreign Minister Chung Eui-yong and Defense Minister Suh Wook.

"Beijing has an interest, a clear self-interest in helping to pursue the denuclearization of DPRK," Blinken said, referring to the North's official name, the Democratic People's Republic of Korea.

"Because it is a source of instability, it's a source of danger and obviously a threat to us and our partners, but China has a real interest in helping to deal with this," he added. 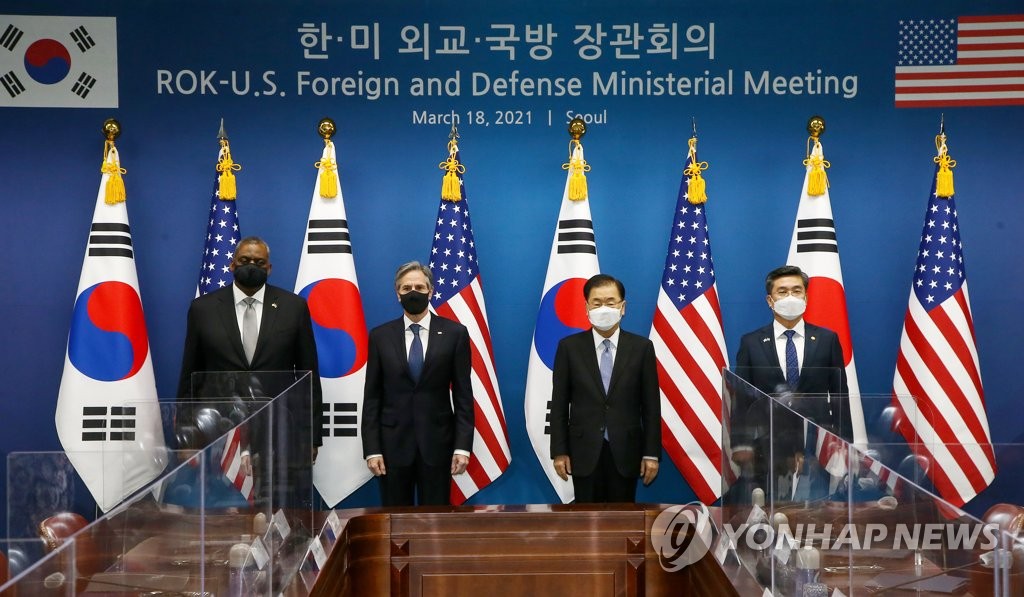 "I would hope that whatever happens going forward, China will use that influence effectively," he said.

Hours before the symbolic meeting, North Korean First Vice Foreign Minister Choe Son-hui said Pyongyang will continue to ignore any contact from the U.S. unless Washington ends its "hostile" policies toward Pyongyang.

On Choe's remarks, Blinken was noncommittal.

"I'm aware of them, but what I'm most interested in right now are the comments and thoughts of our allies and partners, which is why we're here, as we complete our review so that's what we're focused on," he said.

Emphasizing the Joe Biden administration's commitment to liberal values like human rights and democracy, Blinken made clear that the human rights issue would remain a key matter in Washington's future engagement with Pyongyang.

"We are committed to the denuclearization of North Korea, reducing the broader threat the DPRK poses to the United States and our allies, and improving the lives of all Koreans, including the people of North Korea, who continue to suffer, widespread and systematic abuses within the hands of the repressive government," he said.

Blinken took a swipe at China's "aggressive and authoritarian behavior," suggesting that China-related issues might have surfaced at Thursday's talks.

"We are clear-eyed about Beijing's consistent failure to uphold its commitments," he said. "And we spoke about how Beijing's aggressive and authoritarian behavior are challenging the stability, security and prosperity of the Indo-Pacific region."

He stressed Beijing's actions make a common approach among U.S. allies "all the more important."

"At a time when we're seeing a rollback of democracy and human rights around the world, including in Burma, where the military is attempting to overturn the results of the democratic election by brutally repressing peaceful protesters, it is more important than ever that we stand together for the values and for the interests that unite us," he said.

On the growing speculation about Seoul's potential participation in an expanded version of the Quad forum involving Australia, Japan and India, Blinken said that the U.S. is already working closely with the South on many issues being dealt with within the Quad framework.

"I think, as you know it's an informal grouping of like-minded countries that have come together to deepen cooperation on a whole host of issues ... many of these issues, we're also working very closely with the Republic of Korea," he said.

Chung said that there was no direct discussion about whether to join the Quad at Thursday's talks.

At the press conference, Austin said that the envisioned handover of the wartime operational control (OPCON) would take more time, though the two sides will progress toward that goal.

"While meeting all the conditions for this transition will take more time, I am confident that this process will strengthen our alliance," Austin said.

Noting that the two sides "continue to make progress" toward the eventual transition, Austin said, "We have a lot to look forward to as together."

After the meeting, the two sides issued a joint statement in which they stressed the North's nuclear and ballistic missile programs as their priority and reaffirmed their commitment to addressing the matter.

Seoul and Washington also initialed a recently concluded deal on the sharing of the cost for the 28,500-strong U.S. Forces Korea in a symbolic event to highlight the close-knit alliance.

He said the U.S. is encouraging South Korea and Japan to resolve their historical issues in the spirit of mutual reconciliation.

Later in the day, Blinken and Austin paid a courtesy call on President Moon Jae-in.

This week's Asia trip by the two secretaries caps a weeklong campaign to highlight Washington's efforts to strengthen relations with allies and partners to promote a "free, open rules-based order," which started off in the first leader-level session last Friday of the Quad forum involving Japan, Australia and India.

Blinken leaves Korea later in the day, while Austin is to stay here until Friday.