SEOUL, March 17 (Yonhap) -- The victim of alleged sexual harassment by late Seoul Mayor Park Won-soon on Wednesday called for terminating all "consuming" debate on her case.

The victim, a former secretary of Park, made the plea during a news conference arranged by her supporters in Seoul ahead of the April 7 by-election to elect his successor.

It is the first time since the case erupted last July that the victim has stood in front of the media. On July 8 last year, the victim filed a complaint with the police, accusing Park of having sexually harassed her over several years. Two days later, Park was found dead in an apparent suicide on the hills of a Seoul mountain. He left a note saying "sorry" to everyone but did not elaborate on the sexual harassment case. 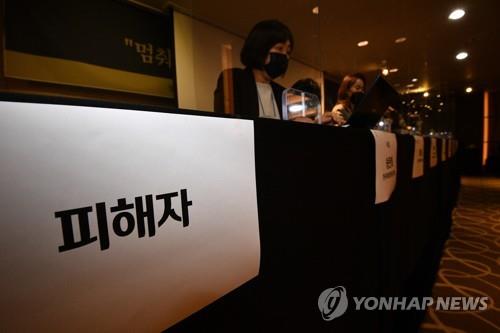 The victim and her family have previously issued statements accusing some politicians and supporters of Park of distorting the truth behind her allegations and complaining of secondary damage inflicted on her, including leaks of her personal information.

"If the late Park had lived and gone through judicial proceedings and exercised his own defense rights, more truth could have been disclosed," the woman said.

"I have been hit by the damage caused by the deceased's renunciation of defense rights. I sympathize with (his supporters') loss and pain, but I now want you all to stop turning that arrow on me. I wish everyone will terminate consuming debate on questions on my damage," she said.

She then expressed regret that the cause for the upcoming mayoral by-election appears to have been largely forgotten, saying she thought she would not be able to return to her post if a candidate from a political party that distorted facts and damaged her wins the by-election.

Police have failed to reach a conclusion on the high-profile case despite a five-month investigation.

In January, however, the National Human Rights Commission of Korea announced that Park's actions toward his secretary amounted to sexual harassment, including sending "inappropriate" messages, photos and emojis late at night and touching her polished nails and hands in his office.

The woman said she has reflected on her decision to sue Park and her ensuing ordeals, while regretting the loss of one dignified life and the procedure to "acknowledge facts that can be forgiven."

She said it was wrong from the beginning that she was once called a "person who claims to have been harmed" amid politicians' silence about the secondary damage done to her.

"If they sincerely acknowledge their wrongdoings, I want to forgive them all for my recovery," she said.

The late mayor was a member of the ruling Democratic Party (DP).

Amid keen attention to the party's response to the victim's comments, Rep. Shin Yeong-dae, a spokesman of the party's election committee, said Wednesday evening that the DP "once again offers its deep apology."

"Thinking of the agony of the victim, who was unable to speak out in the face of power, my heart becomes heavier and more solemn," he said in a statement, promising on behalf of the party to do everything to prevent a recurrence and help her return to her everyday life.

Park Young-sun, the Seoul mayoral candidate of the DP and the entire liberal bloc, wrote on her social media account that she, too, would like to apologize again and receive forgiveness.