SEOUL, March 17 (Yonhap) -- A North Korean media outlet on Wednesday unveiled a propaganda poster depicting a club hammer smashing the alliance between South Korea and the United States, as the top U.S. diplomat and the defense chief visited here for discussions on the North and other alliance issues.

U.S. Secretary of State Antony Blinken and Secretary of Defense Lloyd Austin were set to hold one-on-one meetings later in the day with their South Korean counterparts. North Korea is expected to top the agenda during their meetings.

Uriminzokkiri, a North Korean propaganda media outlet, carried the poster on its website, in which a hammer with "self-determination" inscribed on it crushes a chain into pieces. With the shattered chain comes such words as "alliance first" and "policy of dependence on foreign powers" scattered around.

The poster also comes with a phrase that reads, "Reject rule and intervention by foreign powers and safeguard our dignity and autonomy." The poster appears to be showing South Korea under the heavy influence of the U.S.

The poster was unveiled a day after Kim Yo-jong, the powerful sister of North Korea leader Kim Jong-un, issued a harshly worded statement and lambasted South Korea for holding joint military exercises with the U.S., which kicked off last week and are to last until Thursday.

In the statement carried by the official Rodong Sinmun newspaper, Kim said the peaceful "spring days" of three years ago will not come easily "whatever and however the South Korean authorities may do in the future under their master's instructions," apparently referring to the U.S.

She also warned the new U.S. administration of President Joe Biden not to engage in hostile acts, the first message Pyongyang directed toward the new U.S. government since its January inauguration. 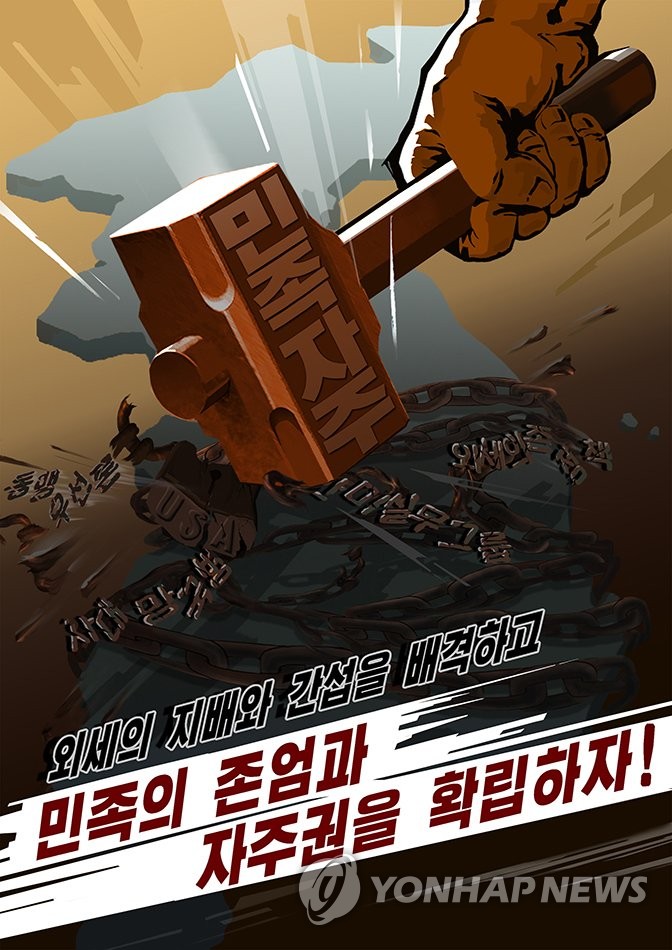