"On behalf of the DP, I once again give my sincere apology to the victim," floor leader Rep. Kim Tae-nyeon, who is acting as the party chairman, said during a party meeting.

"(The DP) will take full responsibility in helping the victim return normally to her everyday life without any difficulties, without feeling any further burden," Kim noted.

The apology came a day after the victim brought the controversial sexual harassment allegation against Park to the forefront once again, ahead of the April 7 mayoral by-election in Seoul.

On July 8 last year, the victim filed a complaint with the police, accusing Park of having sexually harassed her over several years while she was serving as a secretary. Two days later, Park was found dead in an apparent suicide on the hills of a Seoul mountain. 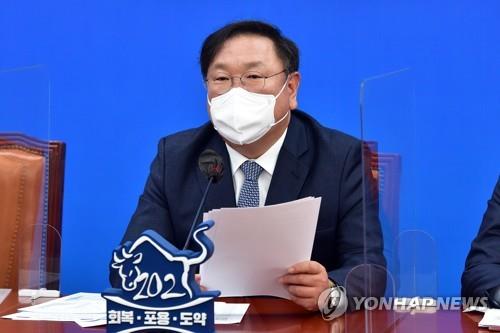 Ardent supporters of Park, including lawmakers inside the party, have openly brought into question the authenticity of the victim's claim, while the victim and her family have accused them of inflicting secondary damage on her such as leaks of her personal information.

The acting chairman acknowledged "insufficiency" in the party's handling of the aftermath of the sexual harassment allegation against the late former mayor, a member of the DP.

Kim also vowed to come up with measures to step up the awareness of gender sensitivity of all elected government officials affiliated with the DP and stick to a "no-tolerance" stance toward any party members guilty of sexual misconduct.

Holding her first in-person press conference Wednesday, the victim said she wants to forgive those who inflicted secondary damage, pending "sincere acknowledgement" of the wrongdoings.

She also pointed out that the cause for the upcoming mayoral by-election appears to have been largely forgotten, renewing attention to the late mayor's apparent suicide in the face of the sexual harassment allegation.

Later in the day, Rep. Ko Min-jung and Rep. Jin Sun-mee also apologized to the victim and offered to resign from the posts of spokesperson and co-head of Park's campaign committee, respectively.

They are among three female DP lawmakers whom the victim criticized for causing her secondary damage by calling her a "person who claims to have been harmed." She urged the DP to take disciplinary actions against them.