SEOUL, March 18 (Yonhap) -- South Korea and the United States emphasized Thursday that North Korea's nuclear and ballistic missile programs are their priority, vowing to resolve the issues with a fully coordinated strategy.

The pledge was made in their joint statement issued after South Korea's Foreign Minister Chung Eui-yong and Defense Minister Suh Wook held their "two plus two meeting" with U.S. Secretary of State Antony Blinken and Secretary of Defense Lloyd Austin in Seoul earlier in the day.

"The Ministers and Secretaries emphasized that North Korean nuclear and ballistic missile issues are a priority for the Alliance, and reaffirmed a shared commitment to address and resolve these issues," the statement read.

Stressing the importance of the full implementation of related U.N. Security Council resolutions, the two sides also vowed to closely coordinate on all issues related to the Korean Peninsula.

"Both sides shared the view that these issues should be addressed through a fully-coordinated strategy toward North Korea between the ROK and the United States," the statement said. ROK is the acronym of South Korea's official name, the Republic of Korea.

For the goal, Seoul and Washington agreed to maintain "high-level consultations" with regard to the U.S.' ongoing North Korea policy review, it read.

According to the statement, the U.S. reaffirmed its commitment to the defense of South Korea and its extended deterrence "using the full range of U.S. capabilities," while calling for the maintenance of a full joint readiness posture against "all shared threats" through "combined training and exercises."

The two sides also noted "great progress" in their push for the transition of wartime operational control (OPCON) of South Korean troops from Washington to Seoul, and vowed to continue efforts.

Blinken blasted China for its aggressive and repressive acts, and Austin said China, along with North Korea, poses unprecedented challenges. But they stopped short of directly mentioning China in the statement.

"The ROK and the United States reiterated their resolve to continue to work together to create a free and open Indo-Pacific region through cooperation with the ROK's New Southern Policy," the statement said. The policy is meant to strengthen ties with Southeast Asian nations.

The two sides also affirmed the importance of trilateral cooperation, involving Japan, and pledged to "continue promoting mutually-beneficial, forward-looking cooperation to promote peace, security, and prosperity in the region," the statement said. 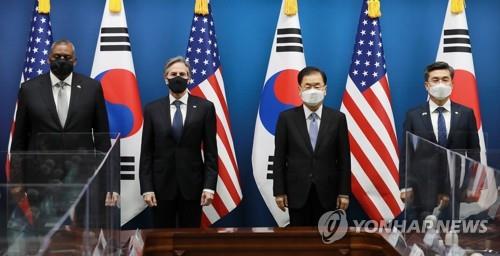