(ATTN: UPDATES throughout with press briefing)
By Lee Chi-dong

During a meeting here with Secretary of State Antony Blinken and Secretary of Defense Lloyd Austin, Moon said that the Seoul-Tokyo relationship is very important for regional peace, stability and prosperity and constitutes a "firm foundation" for tripartite cooperation, according to Cheong Wa Dae spokesman Kang Min-seok.

Moon said South Korea will continue efforts to restore its relations with the neighbor, which have long soured over shared history.

His remarks came as the Biden administration is openly seeking to bolster three-way partnerships with the two key Asian allies.

In what may be a diplomatic quid-pro-quo, the visiting U.S. officials were quoted as saying that they understand South Korea's geopolitical position on the China issue.

They cited the "complicated" nature of relations between the U.S. and China, which are "hostile, cooperative and competitive," Kang told reporters following Moon's 50-minute meeting with them.

They expressed hope for close cooperation with South Korea regarding the China issue. 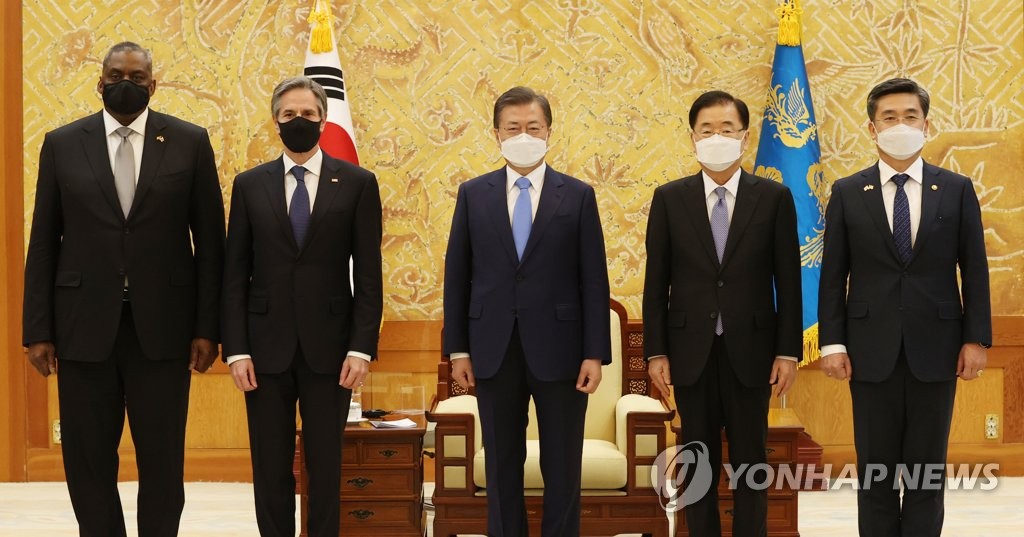 Moon, meanwhile, stressed that South Korea and the U.S., as responsible partners that share values, need to further develop their relationship into a "comprehensive strategic" one to cover not just security challenges but also other pending global issues, such as COVID-19, cybersecurity and terrorism.

He then reaffirmed his government's commitment to close cooperation in efforts to move forward the Korea peace process, which includes the "complete denuclearization of North Korea," Kang said.

The U.S. officials also agreed to "communicate closely with South Korea with an open mind" in the process of reviewing Washington's policy on Pyongyang, he added.

They conveyed Biden's message of expectations that Moon will take part in the virtual Leaders' Climate Summit to be held on April 22, expressing their gratitude to South Korea for declaring its goal of going carbon neutral by 2050. 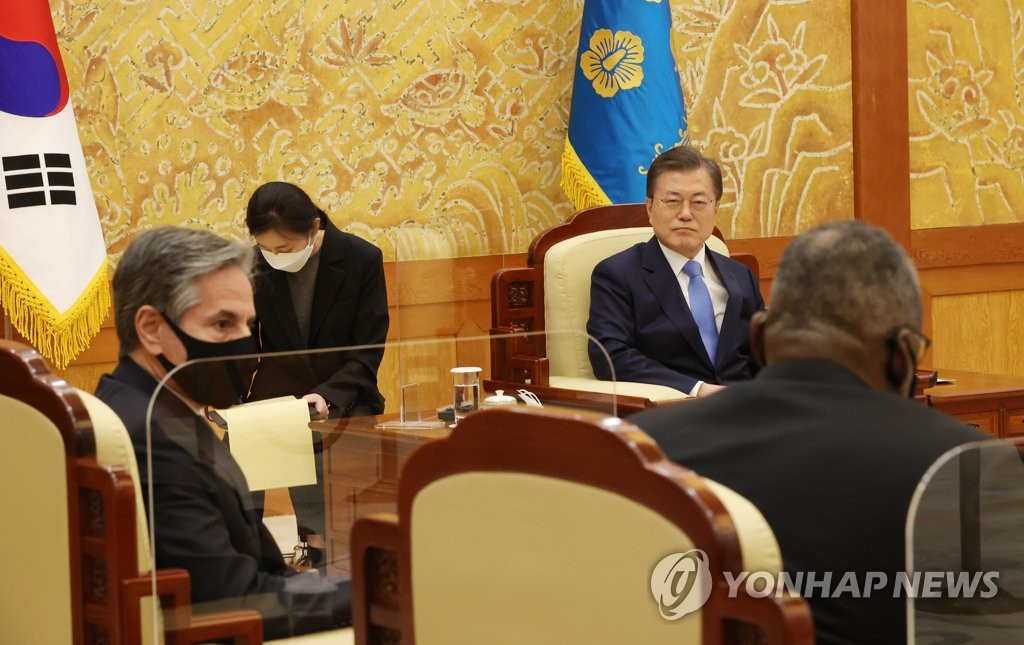 Moon said he would join the summit and requested cooperation for synergy between the event and the second P4G summit on green growth and sustainable development, which is slated to take place in Seoul in May.

Moon and the secretaries also exchanged views on political instability in Myanmar.

The president said South Korea will provide every possible support for the recovery of democracy and peace there.

South Koreans, in particular, have an experience of the 1980 civilian pro-democracy protesters in Gwangju and they are sympathetic to the people in the Southeast Asian nation who desire democracy, Moon noted.

Blinken and Austin were on the first overseas trip by top-level American officials since the launch of the Biden administration. They said it was made at Biden's decision.

Earlier in the day, they have the so-called two plus two talks with Foreign Minister Chung Eui-yong and Defense Minister Suh Wook.