Attending a government strategy meeting on the Green New Deal policy at the Boryeong Thermal Power Plant in Boryeong, South Chungcheong Province, Moon said the nation's political, economic, social and cultural sectors should be overhauled "with an extraordinary determination that the Green New Deal is the only way for the nation to survive."

The Moon administration has been campaigning for the Green New Deal aimed at fostering environment friendly industries in tandem with a push for balanced national development. 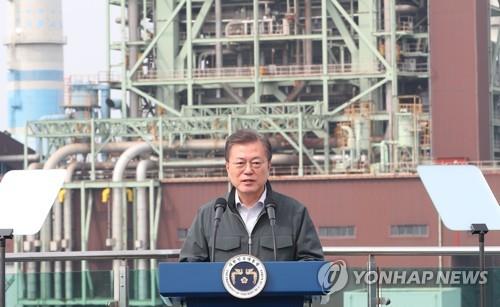 On his vision of South Korea achieving carbon neutrality and reducing carbon emissions to zero by 2050, Moon said the nation has reduced its greenhouse gas emissions by 10.8 percent over the past two years, thanks in part to the earlier-than-scheduled closures of coal power plants.

He also vowed efforts to ensure the "democratic transition of energy" by mandating an inclusive energy policy that would minimize economic marginalization and job losses in the process.

Moon also praised the government of South Chungcheong Province for taking the lead in the carbon neutrality drive and deciding to close 12 coal power plants in the province by 2034.

Moon says Green New Deal the only way of survival

Moon says Green New Deal the only way of survival