Starting from Tuesday, more than 370,000 health workers and patients aged 65 and older at sanatoriums, nursing facilities and rehabilitation facilities will receive their first shots of AstraZeneca's COVID-19 vaccine in steps, according to the Korea Disease Control and Prevention Agency (KDCA).

They will get second shots from the first week of June, added the KDCA, which is in charge of South Korea's state vaccination program.

The country has been rolling out the vaccine since late February, beginning with the elderly and health workers, but had postponed vaccinations for those aged 65 or older due to a lack of clinical data showing the vaccine's effectiveness for the age group.

After new overseas studies showed that AstraZeneca's vaccine and several others are effective in preventing COVID-19 for the group, the government decided to expand the vaccination program.

Starting in the second quarter, a total of 11.5 million elderly people aged over 65, school health teachers and people working in selected sectors, including police officers, firefighters and flight attendants, will receive the vaccine.

South Korea aims to get 70 percent of its population inoculated by September, with so-called herd immunity here predicted to be created by November. 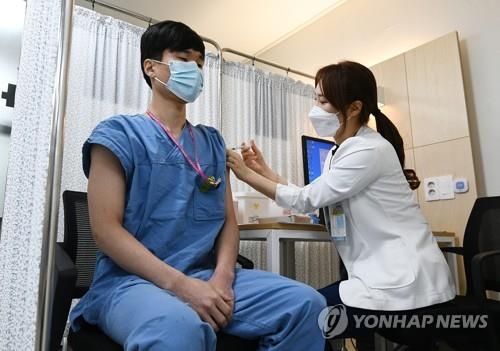 Meanwhile, President Moon Jae-in, 68, and first lady Kim Jung-sook, 66, will receive an AstraZeneca vaccine shot on Tuesday in preparation for participation in a Group of Seven (G-7) summit to be held in Britain.

The KDCA said it is giving priority to Moon and Kim as they require "essential" foreign travel for the diplomatic event. Britain has invited Moon to the multilateral session.

The president's early vaccination is partly aimed at easing public concerns about the safety and efficacy of the AstraZeneca vaccine.

A cumulative 670,000 people in the country have already been inoculated since the country started the vaccination program on Feb. 26.

South Korea reported 456 more cases of the new novel coronavirus on Sunday, bringing the total caseload to more than 98,000, the KDCA said.

S. Korea to begin inoculating people aged 65 or over at nursing homes, hospitals this week

S. Korea to begin inoculating people aged 65 or over at nursing homes, hospitals this week