In its five-day survey through last Friday on 2,510 adults nationwide, support for the president dropped 3.6 percentage points week-on-week. The previous low of 35.5 percent was recorded in the first week of January.

The proportion of those who disapprove of his presidency jumped 4.8 percentage points to 62.2 percent, the highest mark in the pollster's tracking research. 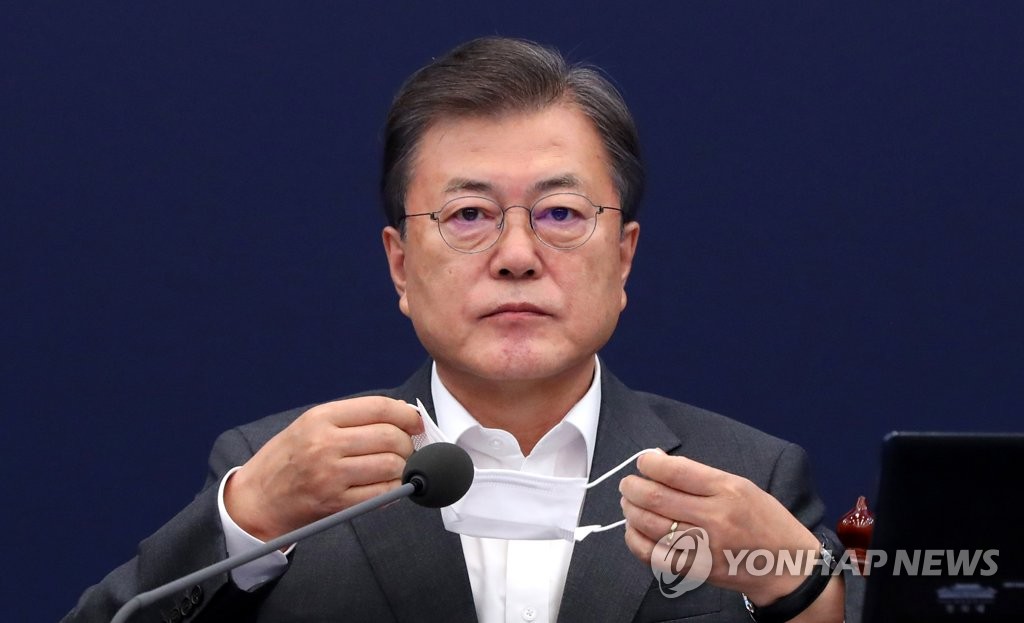 The ruling Democratic Party's approval rating also dived 2 percentage points to the lowest of 28.1 percent since the launch of the liberal Moon administration, according to the pollster. The previous low was 29.3 percent posted in the starting week of 2021.

A Realmeter official said the property-related issue is apparently continuing to deal a heavy blow to the ruling bloc despite Moon's public apology over it.

Dozens of officials at the Korea Land and Housing Corp. (LH), a state-owned enterprise in charge of the public housing supply, and other government offices, as well as some lawmakers, were found to have bought undeveloped land around the capital ahead of announcements on plans to create new residential towns there.

The margin of error is plus or minus 2 percentage points with a confidence level of 95 percent. 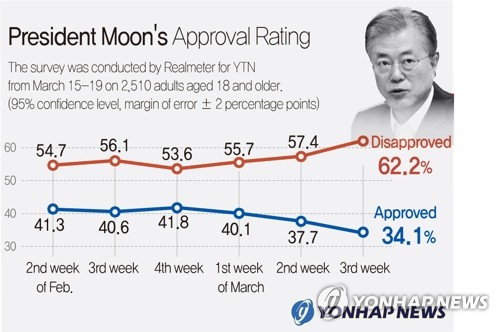 A separate poll by Ipsos found that both of the opposition party candidates -- Oh Se-hoon and Ahn Cheol-soo -- are leading Park Young-sun of the DP by big margins in the Seoul mayoral race.

Oh of the PPP and Ahn, leader of the minor opposition People's Party (PP), have agreed on a single candidacy. The two parties plan to pick a "unified candidate" this week on the basis of two independent public opinion polls.

In a hypothetical two-way race, surveyed by Ipsos on 1,002 voters in Seoul last Friday and Saturday, Oh won with 50.6 percent over Park with 36.8 percent.

Ahn was in front with 52.3 percent in an one-on-one competition with the DP flag bearer with 35.6 percent. The margin of error is plus or minus 3.1 percentage points with a confidence level of 95 percent.

Meanwhile, Yoon Seok-youl, a former prosecutor general, is maintaining his lead in a survey of who is fit to become South Korea's next president.

Public support for him came to 39.1 percent in the two-day poll by the Korea Society Opinion Institute (KSOI) of 1,007 people, aged 18 and older, across the nation from last Friday, up 1.9 percentage points from 37.2 percent announced last Monday.

Gyeonggi Province Gov. Lee Jae-myung of the DP and former DP leader Lee Nak-yon garnered 21.7 percent and 11.9 percent, respectively. The presidential election is slated for March 9, 2022. The margin of error is plus or minus 3.1 percentage points with a confidence level of 95 percent.

Keen attention is being paid to the odds of Yoon becoming the flag bearer of the opposition bloc critical of Moon in the election.